The Green Beast of Konoha
Lee
Papa (by Metal)

Become a respectable ninja without ninjutsu or genjutsu. (partially succeeded)

Rock Lee is one of the main supporting characters in the Naruto anime/manga series and the Boruto: Naruto Next Generations anime/manga series. Kishimoto considers Lee his favorite character to draw, and at first designed Lee to symbolize human weakness. In the anime and manga, Lee is a ninja affiliated with the village of Konohagakure, and is a member of Team Guy, which consists of himself, Neji Hyūga, Tenten, and Might Guy—the team's leader. Unable to use most ninja techniques, Lee dedicates himself to using solely taijutsu, ninja techniques similar to martial arts. Lee dreams of becoming a "splendid ninja" despite his inabilities. Lee has appeared in several pieces of Naruto media, including the third and fourth featured films in the series, the third original video animation, and several video games. Numerous anime and manga publications have commented on Lee's character. IGN compared Lee to Bruce Lee and Noel Gallagher, and Anime News Network called Lee the "goofiest looking character" in the series. Among the Naruto reader base, Lee has been popular, placing high in several popularity polls. Numerous pieces of merchandise have been released in Lee's likeness, including figurines and plush dolls.

He was voiced by Brian Donovan also voiced Davis Motomiya from Digimon Adventure 02.

Lee possesses very thick eyebrows (leading to the nickname "Centipede Brows" (ゲジマユ, Gejimayu, English TV: Bushy Brows) by Naruto) and large, rounded black eyes with prominent lower eyelashes. During his academy days, Lee's hair was much longer and fastened in a braid that, along with his style of dress, gave him a more traditional Chinese appearance. When first joining Team Guy Lee's appearance changed drastically. He had shorter hair than before that curved upwards in the back. He still maintained the Chinese appearance, since he wore a robe and a martial arts belt around his waist. After joining Might Guy's team, his appearance changed considerably to emulate his idol and sensei.

His hair is now cut and styled into a bowl-cut style like Guy, and he also began wearing the same attire, consisting of a green jumpsuit, orange leg warmers, and a red forehead protector worn as a belt. The only difference in his attire were the bandages he regularly wears around his hands and wrists, which also cover a set of stitches on his left hand, a trait that was due to his rigorous taijutsu training. In Guy's youth however, it is revealed that he also wore bandages.

During Part II, his appearance has changed the least out of his friends. The most noticeable changes are that he has grown considerably taller, and wears a flak jacket, as a chūnin, further emulating his sensei, however instead of wearing it open, Lee's is zipped up.

Lee is extremely energetic, single-minded, and hot-blooded. Despite his very passionate nature, Lee has also shown strong instincts, able stay focused at the mission at hand, rarely losing his composure, and notice the presence people around him, even recognizing his friends. He is characterised as being the epitome of a "nice guy", having assumed many of Guy's personality quirks. One such trait is his apparent lack of common sense, believing at times that he can get what he wants by not wanting it.

At other times, he takes copious notes, but forgets that he cannot check them during a fight. He has a keen sense of honor, and respects his opponents, refusing to hold grudges against those who have defeated him, and returning favors to those that have helped him. This was shown by his befriending of Gaara, forgiving him for crushing his arm and leg — injuries that nearly ended his career as a shinobi. Lee feels others should show the same respect towards their opponents, and is disgusted whenever someone is unnecessarily cruel to their enemies.

Lee is known for speaking respectfully to others, being very proper in both English and Japanese language versions, and never using contractions or swearwords. He also uses formal Japanese, applying proper titles ("-san", "-kun", etc.) to anyone he meets. However, Lee refers to his team-mates Neji Hyūga and Tenten just by their given names, implying that he is close enough to them to use such an informal way to speak to them. His relationship with Guy has also caused him to acquire many of Guy's traits; in addition to his personality, his dedication to his promises, as well as his belief that one cannot dislike food, are characteristics of Guy. Lee also carries this small book and pencil to recall the various bits of information Guy has given him over time.

Lee's attempts to prove and better himself are recurring themes for his actions throughout the series. He is generally optimistic, and believes that, with hard work and passion, he can surpass a natural genius, but can be prone to depression when faced with setbacks. His drive to succeed was initially most evident with his rivalry with Neji, having learned from Guy that having a rival will provide incentive to succeed. Neji, a "genius" ninja, found Lee's efforts of bettering himself to be in vain, and believed that Lee would be a "failure" for the rest of his life. Also, when making a promise, Lee assigns himself arduous tasks to complete in the event that he doesn't live up to his expectations. When this promise is broken, usually just barely, he trains to prevent it from happening again.

Rock Lee was constantly mocked by his fellow students, while at the academy, because of his inability to use either ninjutsu or genjutsu, even failing to utilize the more simple techniques that all shinobi learn to use at a young age. That would mean all Lee had going for him was taijutsu, and even then that was only average. It seemed impossible that Lee would ever become a ninja, and anyone else in his rare situation would have giving in, but not Lee. Every day Lee would push his body to the limits, by constantly training in taijutsu, giving him arduous training regimes, that if he failed to meet his promise for completing one task, he would train in an even more difficult task. It is this hard-working determination, which has allowed Lee to succeed as a ninja.

Ever since the academy, Lee has been under the watchful eye of Might Guy, the number one taijutsu specialist in Konoha. Guy saw something special in Lee, becoming proud when Lee was able to complete a task, and greatly appreciating his never gives up attitude. Lee also saw Guy as not just a sensei to him, but also a father figure, becoming extremely upset and angry whenever someone made fun of Guy. Lee was eventually signed to Team Guy, along with Tenten and Neji Hyuga, and during that time his appearance and personality greatly resembled Guy’s, such as wearing clothing like him and even having the same style hair cut. It was during this time that Lee developed a rivalry with Neji, believing that with enough hard work, someone like him will be able to surpass a natural genius, although Neji believed he is and always will be superior to Lee and his hard work was pointless.

This did not stop Lee, even when he was being beat by Neji in training; he carried on training to make himself stronger. Under Guy’s influence and tutelage Lee trained constantly in taijutsu, and in the style known as strong fist, that deals external damage to the body, such as breaking bones. Lee was able to master many of the styles most difficult techniques, such as the Front Lotus. These types of moves are known to put a lot of strain on the body, and while anyone can perform them, only the likes of Lee and Guy can deal with the strain that it puts on their body, because they have have been through the necessary training to handle it. Since his training, Lee has worn heavy training ankles weights, which increases his strength but decreases his speed to a point which is still considered incredibly fast by his peers.

Upon taking these weights off, his speed increases greatly, to the point he becomes a blur and even Kakashi’s Sharingan found it hard to keep up. Lee is also a natural master in the style known as Drunken Fist, upon drinking even a single drop of alcohol, he becomes violently drunk and his fighting style is unpredictable, almost impossible to follow. In this state, he is constantly trying to impress Guy even if he is not around, and he will attack friend or foe. Lee has also learned to open up the first five of the Eight Gates, which is a difficult feat even for the most talented of ninja, upon opening these gates, his speed and strength are forcibly pushed past their natural limits, at the cost of his health.

Lee is also very polite and respectful, referring to people in a very proper way. He is also very respectful to his opponents and carries a great sense of honor, to the point that his good-natured heart stops him from holding grudges, even forgiving Gaara and building a friendship with him, even after he crushed his arm and leg. Lee also believes that all ninja should show respect to there opponents and becomes angry when people fail to do so. He also believes that by not wanting something, only then will he be able to get it, as seen moments before his battle with Gaara. Lee also has deep feelings for Sakura, asking her to be his girlfriend. Lee has vowed to always protect Sakura, and because of her he has pushed himself even further. At first Sakura does not like this but in time she begins to care for Lee even bringing him flowers when he was in hospital. 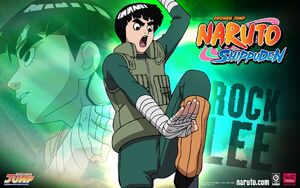 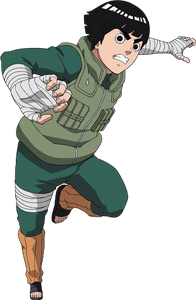 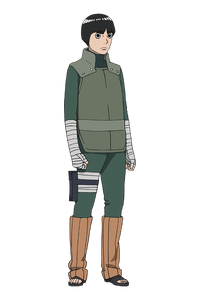 The Last: Naruto the Movie Appearance. 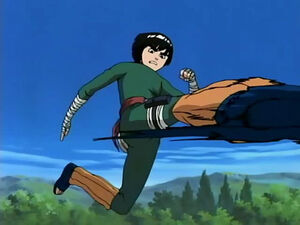 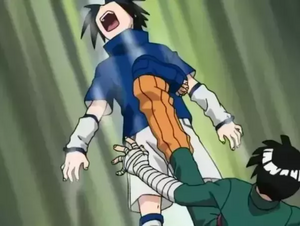 Rock Lee kicking Sasuke with Taijutsu in their fight before the Chunin Exams. 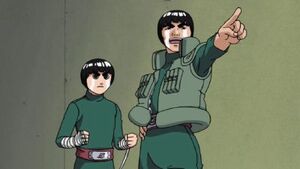 Lee and Guy together before the Chunin Exams. 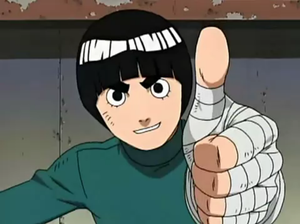 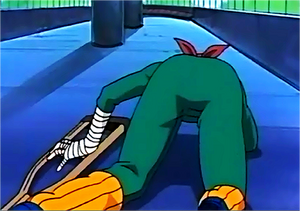 Lee struggles after sustaining injuries during the Chuunin exam. 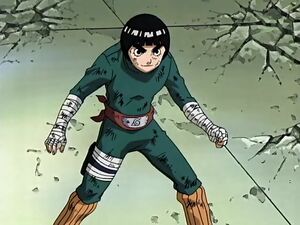 Rock Lee during match with Gaara. 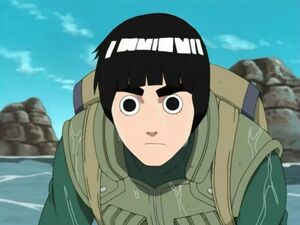 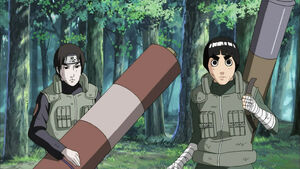 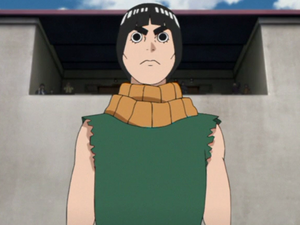 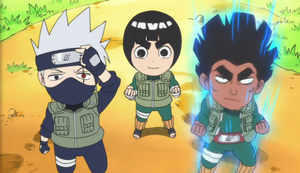 Kakashi and Guy save Lee, and Lee proudly switches back to his Guy attire. 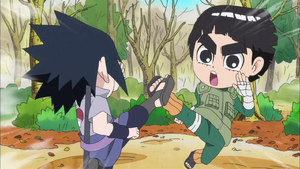