Rocket (Planet of the Apes)

Second-in-command of the Ape Army

Hanging out with Caesar and Maurice, protecting the Ape Colony and his family

Rocket is an antagonist turned major character in Rise of the Planet of the Apes and its 2014 sequel Dawn of the Planet of the Apes. He is the tritagonist of it's 2017 sequel War for the Planet of the Apes. Rocket is an altered chimpanzee who was the Alpha at the San Bruno Primate Shelter before and during Caesar's time at the shelter. He was a typical bully until Caesar outsmarted him and took his place as Alpha. Settling their differences aside, the two became the most unlikely of allies. During the Ape Rebellion, Caesar tasks Rocket as one of his lead lieutenants. After ten years, the two are still best friends and Rocket is still one of Caesar's closest companions. He plays a big part in the Ape Council and the Ape Army as he is Caesar's second-in-command. He is also the husband of Tinker, and the father of the late Ash.

He was played by Terry Notary who also played King Kong in Kong: Skull Island and Buck and Ghost Wolf in The Call of the Wild.

Rocket used to be the Alpha male at the San Bruno Primate Shelter and he bullied and physically pummeled Caesar for being a newcomer. Dodge ended the fight between Rocket and Caesar by tranquilizing both apes.

Caesar then unleashed the gorilla Buck and having earned the mighty gorilla's respect, Caesar used Buck to intimidate Rocket into ending his bullying ways. Later on, Caesar spread the ALZ-113 drug to all the apes at the San Bruno Primate Shelter so that each of them can be smart enough to coordinate an escape strategy plan and overthrow Dodge. Rocket having earned the ALZ-113 treatment also

After knocking out Dodge, Caesar goes in to free the apes before pausing at Rocket's cage. Rocket doubted that Caesar would let him out after the way he just behaved, but Caesar did free him which made Rocket take an even greater admiration into his liberator and newfound friend.

While the apes escaped from the primate shelter heading out to Gen-Sys labs and the San Francisco Zoo to free the other apes being held captive there including Koba, Rocket then freed an ape who was netted by a San Francisco Animal Control officer, who the apes scare away by throwing gate spears at his truck scaring the officer into driving away for dear life.

The apes ultimately run into a CHP blockade at the Golden Gate Bridge, which Caesar successfully overcomes by conducting a strategy that involves all apes tackling the human police without a single ape getting shot. Rocket tackles a SWAT officer and renders him unconscious from hitting him against a police car.

Rocket is then seen standing before Caesar along with all the other apes (with the exception of Koba) and watches Caesar climb up a tree.

Dawn of the Planet of Apes

Rocket's son Ash plays a larger role in Dawn than Rocket himself. After most of humanity was decimated by the Simian Flu created by Will Rodman, the apes including Rocket were living happily in the San Francisco forests and Rocket even started his own family having a wife and son (Ash). One day, Ash gets shot by human scout Carver and Rocket is devastated screaming his son is bleeding.

Koba, a vengeful bonobo who despises humans for conducting science experiments on him that resulted in the loss of his eye, tries to convince Rocket that the humans must pay for this. Rocket claims that because he listens to Caesar, he refuses to incite any military action upon the humans since Caesar advices against it. This makes Koba even angrier since the apes refuse to declare immediate war on the human colony in San Francisco that survived the Simian Flu.

Koba then ordered his supporters to chain up any apes who refused to listen to him because they sided with Caesar instead. Koba had Maurice, Rocket and several other apes loyal to Caesar chained up. Koba even kills Ash as retaliation for refusing to beat down a human to death. Rocket however was later on freed by Blue Eyes and Caesar avenged Rocket's son by killing Koba in the climatic battle.

Rocket has a much bigger role in War than in the previous two entries having more screen time and more significance to the plot. In War, the human race is still being crippled by the Simian Flu as Alpha-Omega, a paramilitary faction that broke off from the United States military, has begun executing humans who were infected with the flu and also targeting apes. Rocket survived the Alpha-Omega pre-emptive military strike on the ape colony by having been outside of the colony at the time hunting for fish in the rivers.

Rocket accompanied Caesar, Maurice, and Luca to find the human threat known as Alpha-Omega and either punish or execute them for killing off multiple apes and infiltrating their colony. They approached a human man carrying tree branches but before the man could fire at Rocket and Maurice with his gun, Caesar shoots him dead. The apes hear a crash come from the man's house and investigate, before finding a human girl hiding in bed with Rocket pointing a gun at her. Maurice orders that they stand down because the girl poses no threat. The apes prepare to leave but find the girl sadly looking down on the dead man's body which proves that she was relying on the man that Caesar shot as a caretaker. Maurice convinces the apes to take Nova with them since she can't survive on her own.

The 4 apes and Nova then see a militarized human force on Humvees, military trucks and horses passing by which they follow up to a snowy mountain. At the snowy mountain, Rocket points to Caesar at three humans buried in snow with bleeding wounds coming out of them. Caesar then learns that the human military they just witnessed was the Northern Army and they are at war with Alpha-Omega since the Northern Army consists of humans who were infected with the Simian Flu and instead of perishing, they have devolved and are mute just like Nova. Alpha-Omega that is led by a Colonel intends to wipe out all infected humans to cleanse the human race of the flu entirely.

While at the snowy mountain, an unseen stranger steals one of the apes' horses forcing the apes to chase after him. Once they reach the secret hideout that the stranger retreated to, Caesar, Luca and Rocket preparing their guns out at the stranger, the stranger then reveals himself to be a chimpanzee who can talk and announces that he's Bad Ape. Bad Ape offers to befriend the apes as he's delighted now he has new friends and tells the four apes and Nova to stay at his shelter and avoid going to the "Bad Place" specifically referring to the Alpha-Omega military post. Rocket then advises Caesar that they go to the Alpha-Omega post where the Colonel is stationed. Bad Ape then orders they not do so, making Rocket and Luca jump and refrain Bad Ape from forcing them to avoid going there. After at first begging Caesar not to go there because it's too dangerous, Bad Ape does lead them to the Alpha-Omega post anyways. In the process, Luca gets shot by a guarding soldier and Red abducts Caesar, forcing Maurice, Rocket, Nova and Bad Ape to figure out how to liberate Caesar and the hundreds of apes that turn out to have been rounded up and enslaved by the Colonel. The four mostly watch through binoculars unable to do much but then at night Nova walks in to the camp to give a dying Caesar food and water. After being alerted by Maurice that Nova would get killed by Alpha-Omega for being infected, Rocket sacrifices himself to save Nova from execution by running into the Alpha-Omega watchtower lights so that they become aware of his presence and to make him think that he was one of the enslaved apes trying to escape.

Nova, Maurice and Bad Ape then dig a tunnel to lead the apes to freedom and escape the cages. Rocket starts a prison fight by throwing poop twice at the AO soldier Boyle (once on the back of the his neck and second right onto his face). Boyle ran into the ape cage unaware he just fell into a trap, as Maurice grabs him and drags him down underground where Maurice proceeds to beat him to death and Bad Ape throws the keys to the locks holding down the apes to Rocket.

During the climax scene, Rocket is seen shooting his M4A1 at the Alpha-Omega officer who was gunning down escaping enslaved apes with an FN GAU-21 Aircraft Machine Gun. Rocket landed some hits on the machine gun but he failed to get any hits on the officer who proceeded to counter-fire more bullets, forcing Rocket to retreat behind a rock along with Bad Ape. Caesar then with unexpected assistance from Red manages to blow up the Alpha-Omega military post by detonating their gas tanks with grenades. The Northern Army rush in to the decimated military post and start celebrating over their victory while also spotting Caesar. Before the Northern Army could shoot Caesar, an avalanche came rushing in at that moment, forcing the apes to climb up trees while the Northern army try to flee but end up getting killed. As Bad Ape saw the avalanche coming, he simply kept pointing at it commenting "OH NO! OH NO!" instead of using common sense and running away just like all the other apes until Rocket makes Bad Ape run as well.

After avoiding the avalanche, the hundreds of apes led by Caesar all walk to find their new home in an oasis next to a lake where Rocket and the others can live happily and freely without human intervention. When Maurice called the troop, Rocket turned around and when he saw that Caesar was dead, he walked immediately to him. 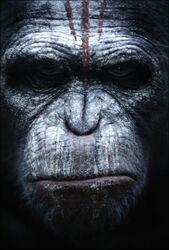 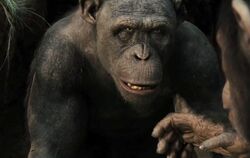 Rocket after being dosed with ALZ-113.

Rocket, Maurice and Luca struggling with a deserter soldier.

Rocket and his friends perched on an electric tower.

Rocket and Caesar realizes that Luca is mortally wounded.

Rocket and Maurice spying on the human base.

Rocket during the last battle against the humans.