Member of the Guardians of the Galaxy
Genetically Engineered Racoon
Member of the Avengers (formerly, team disbanded)

Spending time with Peter Quill and The Guardians
Stealing (formerly)

He is a loving-adventure and wisecracking genetically altered, cybernetically enhanced, trigger-happy raccoon who spent a majority of his life as a bounty hunter alongside his sentient tree companion, Groot.

Rocket's origins are mostly unknown, but at some point, illegal genetic experiments were conducted on his raccoon form, thereby transforming him into a sentient being. This process was apparently traumatic, as Rocket describes it (in a drunken diatribe) as having been ripped apart and put back together numerous times.

Rocket eventually met Groot and the both of them became bounty hunters seeking to earn money, usually through illegal means such as theft, to sustain themselves. Because of this criminal lifestyle, he had frequent run-ins with the law and was imprisoned on several occasions, but had managed to escape confinement every time. His search for money would lead him to Xandar where he first met Peter Quill (Star-Lord).

The two mercenaries cross paths with human outlaw Peter Quill, in order to collect the bounty on his head. However, after learning of a great intergalactic threat, Rocket and Groot join up with Quill and two others, Drax the Destroyer and Gamora, the reluctant adoptive daughter of the evil Thanos to gave the Orb to The Collector have a bounty of 3000. 00 before Ronan the Accuser can use it to destroy Xandra and the galaxy, after they escaped from prison they start to travel with Quill's ship Milano.

When they arrives to Knowere a drunk Rocket have a lite with a drunk Drax as him had called him vermin and rodent with him hating the fact that don't exist anything like him.

Then they finally meets The Collector telling them about the Infinity Stones with Rocket wants to be pay but when Collector is going to pay them his assistant Carina try to disobey him to take the Power Stone being disintegrated touching it, then Gamora decide to gave the Orb to someone else but then Ronan, that being called by the drunk Drax that wants to kill Ronan to avenge his wife and his daughter, arrives to Knowere and the ship battle ends with Quill and Gamora being kidnapped by Ravagers led by Quill's adoptive father Yondu Udonta, Rocket unable to save them and Drax finish out of conscience due to being beated almost to death by Ronan.

Later Groot reanimate Drax making him waking and Rocket is mad at Drax to having tried to fight with a so powerful army without thinking about them, Drax apologyzes and despite Rocket is still mad at him, he, Drax and Groot goes to save Quill and Gamora.

Then Rocket, Groot and Drax reunites with Quill and Gamora having discovered that they teamed up with Yondu and the Ravagers, then after a Quill's incoraugement to not leave innocent people Rocket accepts to save those people as do Drax, Gamora and Groot, then they goes to Xandar helped by the Nova Corps.

On Xandar Rocket fight with the Sakaarians and then he smash Ronan with his ship saving Drax and his other friends, then Groot sacrifice himself to save them and despite Rocket crying and try to convince him to not doing it Groot console him and he say "We, Are, Groot!" before dying being destroyed despite the others survives but leaving Rocket devasted for Groot's death.

Rocket, Quill, Gamora and Drax hold the Power Stone (in fact is Quill holding it, Rocket and the others simply holding his hand to survive) and then they use it to destroys and kill Ronan, saving Xandar and all the galaxy, despite the victory Rocket cry for the death of his best friend with Drax console him and calming him.

However Rocket rescuee a reantimate twig of Groot and plant it on a vase of earth making reborn and resurrecting Groot despite he still remembering his old life, with new wonderful friends/family and his best friend back to life their crimes are being cancelled by the Nova Corps leaving them free to improve their lives.

With Groot slowing re-growing to his original dimensions and age, Rocket, Quill, Gamora, Groot and Drax becomes a hero team named "The Guardians of the Galaxy" and together with Quill's ship Milano travels to New adventures accompanied by Jackson 5's song "I Want You Back".

Rocket is the tritagonist of the film and overall one of the film's primary protagonists. The Guardians became famous for the heroism, and were employed by the Sovereign to take down the Abilisk, since it was eating their batteries. On the planet, Rocket set up music so they could listen, and were able to defeat the creature by distracting it, and Gamora cutting its neck.

Rocket stole their batteries, and got Nebula as their payment, and were later chased by the Sovereign after they learned of the theft. The Guardians were able to escape, and crashed on Behert, and met Star-Lord's father, Ego, and his assistant Mantis. Rocket and Groot were left to repair the ship, and watch Nebula as the others went with Ego to his place. The duo set a trap for the Ravagers, but were captured due to Nebula knocking out Yondu (who had been captured by the mutiny of Taserface).

The group were captured by Taserface's Ravager clan, and the raccoon mocked his name, causing the entire crew to laugh at him. Groot was ordered to get Yondu's arrow controller, and the trio escape with Kraglin, and Taserface was later killed (but was able to give a distress call to the Sovereign). After learning of Ego was a living planet, the trio went to rescue the others from the cosmic being. After a lengthy battle that cost Yondu's life, Ego was defeated, and the Guardians welcomed Mantis as a member of the team. After Yondu's funeral, the Guardians celebrated, and continued their trek across the galaxy.

Hearing a distress call from the Statesman, the Guardians recover Thor Odinson, who informs them of Thanos' plans, and him destroying Xandar. Thor demands that he be given transport so that he could travel to Nidavellir, a dwarf world where the are powerful weapons. Rocket, Groot, and Thor go the world, and met the dwarf Eitri, and aided the Norse God in creating Stormbreaker.

The trio were transported to Earth amidst the battle of Wakanda, and Rocket meets White Wolf, asking how much for his virbranium arm. Rocket and White Wolf defeated countless waves of outriders, and the last two Black Order members were killed by the Avengers. Thanos teleported to Wakanda, and was successful in collecting all of the infinity stones. After snapping his fingers, the decimation began to take in effect. In horror, Rocket saw Groot dissolve in dust, and accepted defeat alongside the survivors.

Rocket is first seen reuniting with Nebula after Captain-Marvel rescues both Nebula and Iron-Man from the Benatar. Rocket is with the remaining Avengers explaining to Tony why Thor is very depressed and down. Rocket later helps track down the location of Thanos so they can undo the snap. Once the assualt on Thanos goes successfully and the gauntlet is off, Rocket rolls it and sees that the stones are missing, with Thanos saying that the stones were destroyed. Rocket along the other heroes failied undoing the snap while Thanos was killed by a vengeful Thor. 5 years later, both Rocket and Nebula were part of the remaining few heroes who still helped out life harmed by the snap and made sure everyone was doing well and recovering. Rocket was recalled back to Earth to join the time hiest and bring everybody back. Rocket was sent along with Hulk to recruit a now overweight and drunk Thor, and Rocket managed to convince Thor by telling him there was plenty of beer. Rocket was sent along with Thor to 2013 Asgard and get the Aether(Reality Stone) from Jane Foster. While Thor ran off to tearfully reunite with Frigga, Rocket went off and manged to sneak up and steal the Aether. Rocket quickly alerted Thor that he got the stone and they traveled back to 2023. The time heist succeeded in collecting all the 6 Infinity Stones and making a new Infinity Gauntlet and Hulk used the gauntlet to bring back all the people killed from 5 years ago. However, Thanos and the Scantuary 2 bombed the avengers facility trapping Rocket as well as War Machine and Hulk into a pile of flooding rubble. Hulk managed to hold up the rubble just in time for Ant-Man to rescue them. Rocket fought Thanos and his forces and later attended the funeral for Tony Stark. Rocket reunited with the rest of the guardians of the galaxy and flew off along with Thor to a new adventure.

Guardians of the Galaxy Vol. 3 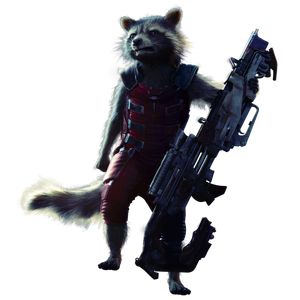 Rocket Raccoon in Guardians of the Galaxy. 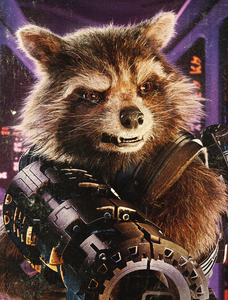 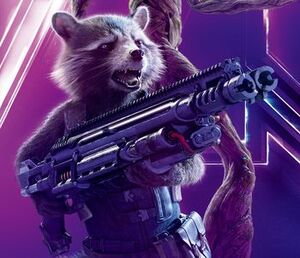 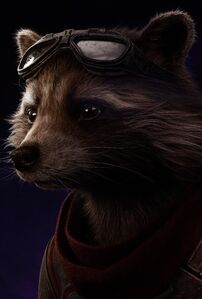 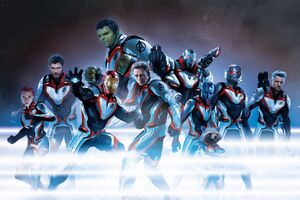 Concept art of Rocket Raccoon with the Avengers in their advanced tech suits. 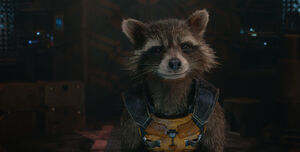 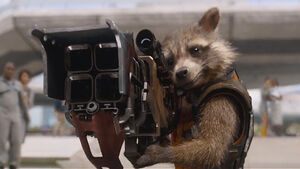 Rocket taking aim at "Star-Lord" in an attempt to cash in on his bounty.

With his partner in crime and best friend, Groot. 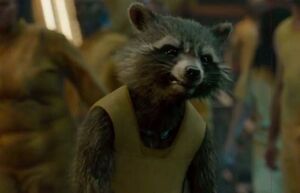 Rocket after being imprisoned in the Kyln by Nova Corps. 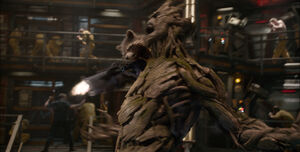 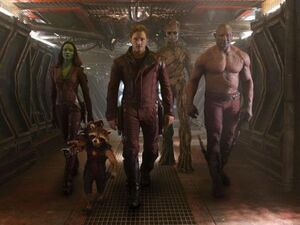 With the rest of the Guardians. 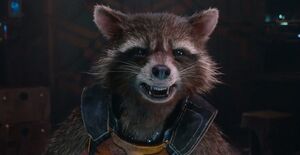 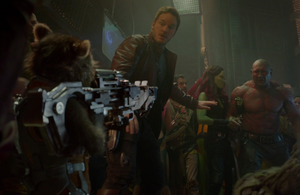 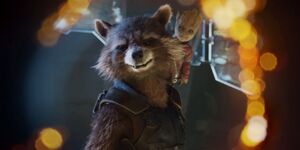 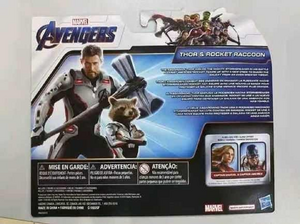 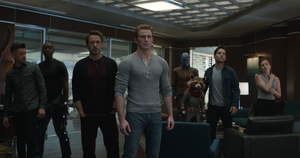 Rocket with the Avengers.

Ditto, with Hulk and Thor.

Rocket on top of War Machine with the Avengers and heroes.

The Guardians of the Galaxy attend Stark's funeral.
Add a photo to this gallery

Retrieved from "https://hero.fandom.com/wiki/Rocket_Raccoon_(Marvel_Cinematic_Universe)?oldid=1723559"
Community content is available under CC-BY-SA unless otherwise noted.