No information
Rockstar is a male character in the anime and manga series One Piece. He's a pirate and a member of the notorious Red Haired Pirates. Before time skip, he was said to be relatively new to the crew. He's the member that Shanks sent to try and deliver a message with Whitebeard, in an attempt to set up a meeting between the two, but was rejected. Even though little is known about him, his bounty is 94,000,000 Berries, which is impressive.

Rockstar is a tall man with dark skin, black eyes, large, round lips, spiky, and red-colored hair. He's always seen wearing a blue robe that goes from his neck all the way down the length of his body, with a tan turtleneck, dark red tie, and brown belt going across his body diagonally like a sash. 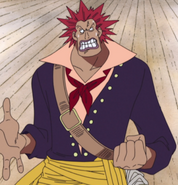 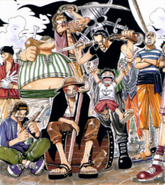