Rocky is a fictional character in the 2016 horror-thriller film Don't Breathe. She was created by Fede Alvarez and Rodo Sayagues and portrayed by actress Jane Levy, who previously worked with Alvarez in Evil Dead, where she played Mia Allen. She serves as one of the primary protagonists of the film (along with Alex) and is the final girl. The character is one of three thieves that become the target of their proposed victim. Levy's performance has received universal praise.

In Don't Breathe, Rocky dreams of escaping from life with her alcoholic mother and moving to California with her younger sister, Ditty. Rocky is a thief that breaks into houses with her thuggish partner Money and gentle friend, Alex and they sell the items that they steal for money. Alex’s dad works for a home security firm, so Alex has access to house keys and insider information on how to bypass alarms. However, his reason for helping is mainly because of the feelings that he has for Rocky. One day, Money learns of a blind Army veteran that lives in an abandoned Detroit neighborhood. He has $300,000 in cash in his house, given as a settlement after a wealthy young woman, Cindy Roberts, killed his daughter in a car accident. While scouting out his house in the day, they get confirmation that the man is in fact blind. They decide to rob the Blind Man, thinking it will be easy. They later approach the house and drug the Blind Man's dog. Discovering that all of the entrances are locked, Rocky climbs through a small window and lets the other two into the house. The group search the house for the money but are unable to find it; assuming it is behind a locked door, Money shoots the lock.

The resulting noise wakes up the Blind Man, who quickly disarms Money and murders him with his own gun. Horrified, Rocky hides in a closet, where she watches the Blind Man open a safe to check on his money. After he leaves, Alex finds Rocky in the closet, and the two open the safe and take the money. Meanwhile, the Blind Man finds the thieves shoes downstairs, and realizes that Money was not the only intruder. Rocky and Alex, use the killer's blindness to their advantage and evade him, then find a door leading to the basement. Inside they are surprised by a gagged woman in a cell. She shows them a newspaper article mentioning Cindy and the car accident; they realize that she is Cindy, held captive by the Blind Man. They free her and run towards the storm cellar door, only to be surprised by the Blind Man on the other side, who shoots at them with Money's gun, but mistakenly kills Cindy instead. They manage to escape into the cellar while the killer shuts off all of the lights. After a struggle, Alex manages to knock out the Blind Man, and Rocky follows him back up to the house.

Rocky tries to escape the house through the ventilation system while the Blind Man revives and seemingly stabs and murders Alex. The Blind Man's dog, now awake, pursues Rocky through the vents, and she is eventually captured by the Blind Man. She wakes up retrained in the basement, where the Blind Man reveals that Cindy was impregnated with his child in order to replace the one that she killed. He says that Rocky must take Cindy's place and give him a child, after which he will get her go. After stating that he is not a rapist, he then attempts to artificially inseminate Rocky with a turkey baster, but Alex, who watched the Blind Man stab Money's corpse, thinking it was Alex, knocks him out and handcuffs him to the restrains.

Rocky and Alex can't call the police, as their blood is all over the house, so they attempt to leave through the front door. However, the Blind Man manages to escape the restrains and shoot Alex dead, while the dog pursues Rocky to her car; although Rocky manages to lock the dog her car trunk she is recaptured by the Blind Man and dragged back to his house. Rocky disorients the Blind Man by setting off his house's loud alarm system, then beats him with a crowbar and knocks him into the basement. His gun fires into his side as he falls. Leaving him for dead, Rocky flees before the police arrive to investigate. Rocky is set to leave Detroit on a train to Los Angeles with her sister. She later sees a news report stating that the Blind Man is in stable condition at the hospital, but, for some reason, did not report Rocky or the stolen money. After seeing the report, Rocky leaves the cafe with her sister and they hurry toward the departure gate.

There is, however, a line in the script which was filmed, detailing the blind man boarding the train behind Alex with a cane, suggesting a sequel. The shot was deleted from the final film, however, it was still left in the trailer. A sequel is still possible, and the concept has been reacted to favorably by fans.

The character has been met with generally positive reviews. Levy's performance has been met with critical acclaim. Donald Clarke praised Jane's performance saying that "Levy has the sauce to earn her status as badass Final Girl." Steven Brinn also praised Levy's performance saying: "Also making their return to the horror genre is actress Jane Levy. Reuniting with Alvarez, she is put through the wringer, taking the worst that The Blind Man can dish out and proving herself to be a worthy opponent as Rocky. As good she is at the physical stuff, what makes her a great final girl is how sympathetic she is. Sure, what is doing wrong (robbing a blind guy is hardly noble), but her ability to sell why she needs the money and the lengths she will go to really make you feel for her. While co-stars Dylan Minnette and Daniel Zovatto are perfect in their roles, it's Levy that stands out. While I'm hardly one to hand out career advice, if Jane Levy and Fede Alvarez want to make horror gold until the end of time I'll all for it."

The character was featured on PopSugar's list of 18 "Final Girl" Halloween Costumes Only Badasses Can Pull Off ranking at number 3. 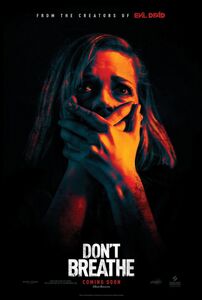 Rocky on the poster. 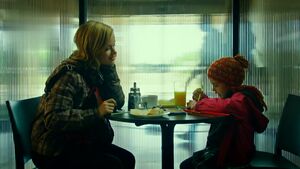 Rocky with her sister, Ditty. 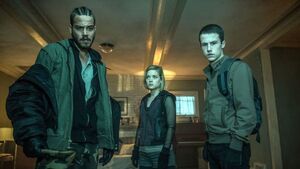 Rocky with Alex and Money. 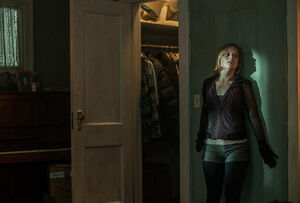 Rocky hiding from The Blind Man. 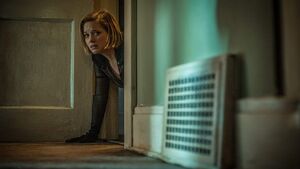 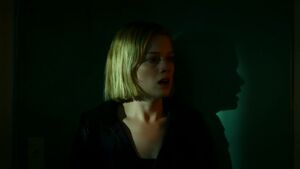 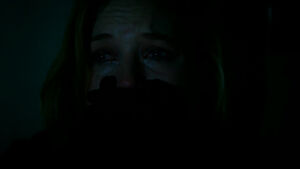 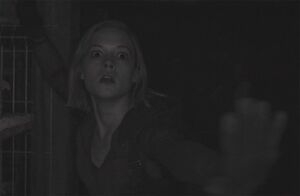 Rocky trying to maneuver in the dark. 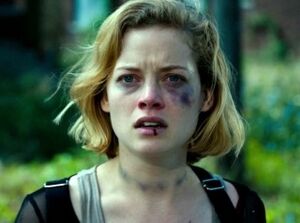 Rocky escaping from the house.

Rocky evading the Blind Man's dog.
Add a photo to this gallery

Retrieved from "https://hero.fandom.com/wiki/Rocky_(Don%27t_Breathe)?oldid=2146823"
Community content is available under CC-BY-SA unless otherwise noted.