Rocky is a Schnauzer/Scottish Terrier mix pup and one of the five tritagonists from the Nick, Jr. show: PAW Patrol. He is the recycler of the PAW Patrol, in which some of the recycling can be reused for certain missions.

In the Canadian and North American versions, Rocky was voiced by John Ralston's son Stuart throughout Season 1 and 2, until he was replaced by Samuel Faraci from Season 3 onwards until Season 7, when he was replaced by Jackson Reid. In the 2021 movie, he voiced by Callum Shoniker, who also voiced The Copycat. In the British version, he is voiced by Eric O'Carroll in Season 1-6 and Courage Clutterbuck in Season 7 onwards.

Rocky is gray with white paws, a white tip on his tail, and white tips on the fur tufts on his face, along with a darker gray circle around his left eye and two circles on his back. He has a black nose and orange-ish brown eyes. He also has a floppy right ear and a nick on his left ear. He has a small spiky tuft of fur on his head.

Being the recycling pup of the team, Rocky is very resourceful and reuses anything he can find to use in any given situation. However, in the series, he has a fear of water, but sometimes has to face this fear while on a mission, although never gets over it. He is good friends with Marshall and Zuma, whom he is playful as the other pups when off-duty.

Like all members of the PAW Patrol, Rocky has a pup tag that he can use to make calls to Ryder, the Lookout, and his fellow members. It can also be used to make video calls to other members.

Rocky's pup pack contains various tools, some of which include a screwdriver, a pincer, glue, adhesive tape, and a spatula.

His Mission PAW pup pack has a radar scanner.

His Sea Patrol pup pack contains a rescue buoy and a metal detector. When he's wearing his scuba gear, it contains a welding tool.

Rocky's vehicle, number 05, is a recycling truck in which he stores various items that can be helpful on missions. It also has two pallet loaders that can be used to load objects into the truck. In season 3, it was upgraded to be able to transform into a tugboat to be used on water-related missions.

As a member of the Sea Patrol, Rocky gets an amphibious vehicle, which also has an airlock that any pup can use to put on their scuba gear and provide assistance under the water.

Rocky uses the old items stored in his truck and not to build new things or repair broken objects. The pincer in his pup pack helps him with constructing and picking up things. 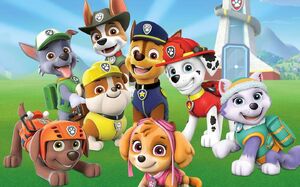 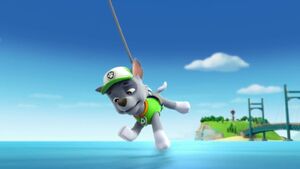 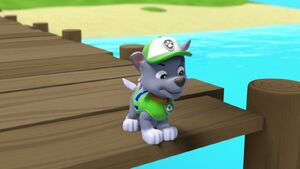 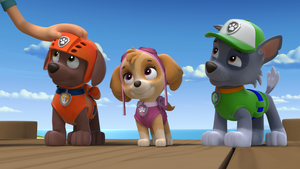 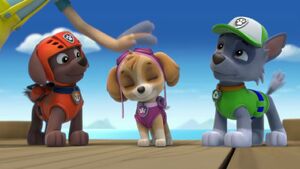 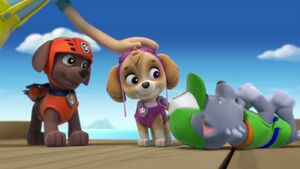 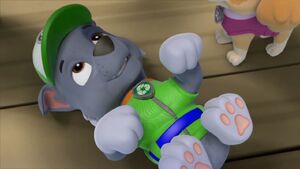 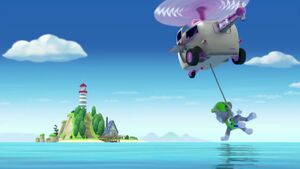 "Jet to the Rescue" 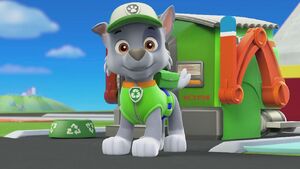 Rocky is the third PAW Patrol member to need help from the other pups. (Seen in "Pups Save the Easter Egg Hunt")