Rodin the Infinite One

Bartender of the Gates of Hell

Provide Bayonetta with her needs

Father Balder
Jubileus the Creator
Alraune (victim for his Alrune)

Rodin is a weapons dealer, a bartender, and the proprietor of the Gates of Hell. He is the one that created Bayonetta's set of pistols, referred to as Scarborough Fair. He seems to be from Inferno and tells Bayonetta that he will trade her items from his shop for halos that she collects from the Angels she kills, claiming they are worth a fortune downstairs. If Bayonetta brings him a golden LP, Rodin uses its angelic melody to make the Demons go berserk and lure them out of their lair so he can craft weapons out of them; though, he seems to become very tired and heavily injured after doing so.

He also helps Bayonetta save the world and even fight the Angels who try to destroy the world.

As an immortal demon, Rodin has the abilities of superhuman strength, some level of invulnerability, dark pyrokinesis, levitation, and the ability to open portals to the deepest depths of Inferno. As an angel, his abilities are similar to Father Balder's, however they greatly surpass them. He is immune to Witch Time (and presumably Light Speed), can summon meteors and streams of energy, and seems to be able to perform his own version of a Wicked Weave, summoning forth huge hands that attack the player from other ends of the arena. In addition to those attacks, he also has the most powerful attack in the game. He will start using the grip attack when his hit point is about half full. If caught, Bayonetta's hit point will be reduced to 0 instantly leaving 1 more hit before being defeated. 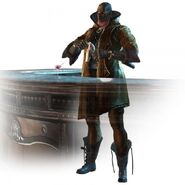 Rodin as an Angel