Recover memories to see what happened in Paradigm City

Roger Smith is the main protagonist and narrator of the anime series The Big O. His chosen profession is as a negotiator, whose job entails finding a resolution for the troubles of Paradigm City, the "City of Amnesia", and is said to be the absolute best at what he does. When memories betray the people and force them to reawaken monstrosities of the city's past, Roger's only option is to fight back with a monstrosity of his own, the black Megadeus Big O.

He is voiced by Mitsuru MIyamoto in the Japanese version and Steve Blum in the English version.

Roger is a tall man with black eyes and well-groomed black hair. His usual outfit consists of a black suit with white buttons and a white collar, black gloves, black trousers and black shoes.

Roger is a very strict and methodical person, having a very clear set of rules that dictate all aspects of his everyday life, from how people must behave in his house to the way he performs his job. Among these are that only young women can enter his house unconditionally, one must wear black if they are to take residence in his home, he doesn't carry a gun (though he will use one for non-lethal purposes), and he only uses force as a last resort. His most important rule of all, however, is that no-one, under any circumstances, is allowed to touch his desk. He will negotiate anything for anyone, but he is a professional and expects the parties to behave professionally also. Otherwise, he insists that they leave.

Despite his professional attitude during missions, Roger starts the series as a very arrogant, witty, sarcastic, and seemingly unconcerned individual to the point of being almost snide. He is also quite lazy, preferring to sleep in well past sunrise and getting really irritated when Dorothy wakes him up with her piano playing, though he later takes her to the android Instro in hopes that he will teach her how to play properly.

Ultimately, Roger values logic above almost all other qualities, and hates to feel out of control of either his emotions or whatever situation he is in. Thus, during negotiations, he maintains as best he can a calm, collected and pleasant attitude. As the series progresses however, many of these traits are ironed out of his character, and he begins to exhibit a much more compassionate and open-minded attitude, learning how to cope with emotional issues and people instead of just ignoring them.

Initially, Roger doesn't particularly care about uncovering the mystery of Paradigm CIty, or exactly why everybody lost their memories forty years ago. His argument is that human beings are adaptable creatures who learn to make do with what they have, and there are some things humanity is better off not knowing. Overtime, however, he becomes more and more determined to find the truth, particularly the truth about himself such as why he can pilot Big O. This often causes him to clash with Alex Rosewater, who is frequently after the same thing..

In Act: 14 Roger confessed that "his life was nothing but boring" and that he was adopted by an affluent foster family. In Act: 4, Roger has a vision in which we see a woman. Roger refers to the woman as "mom" before Dorothy interrupts the vision. It is unclear if this is his foster mom, or his biological mother. There are also some photos of a young Roger with paternal and maternal figures in Act: 1, again it is unclear if these are his biological parents or his foster parents.

Roger eventually joined the Military Police.  It was during this time that he developed a rapport with Dastun. He eventually rose to the rank of lieutenant. After some "arbitrary" reason he decided to resign from the Military Police. It is implied in the series that he resigned since he believed the Paradigm Corporation was not concerned with public's safety.

Roger later claimed, in Act: 14, that he discovered a "run-down bank" and decided to make it his home. While inside he found Norman who had been waiting for his master to arrive. Roger immediately denied being a "master" but after a while conceded. It was around this time that he was told of Big O by Norman. How he decided to become a negotiator is never revealed. He negotiates for anyone under the expectation that he expects the parties to behave professionally. He displays a distrust for the Paradigm Corporation. He only takes a negotiation for them if it is necessary. 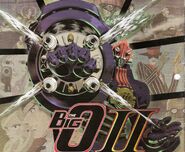 Retrieved from "https://hero.fandom.com/wiki/Roger_Smith_(The_Big_O)?oldid=1653823"
Community content is available under CC-BY-SA unless otherwise noted.