NOTE: This article is about the incarnation of Rogue from the X-Men film series. The mainstream version can be found here: Rogue (Marvel).

Student of the Xavier School for Gifted Youngsters

Can temporarily drain powers from other mutants by physically touching them, if long enough she can kill them

Being with her boyfriend, Bobby Drake and friend Wolverine.

Cure her mutant powers so she can have a normal relationship with Iceman (succeeded but later revived).

Rogue (real name Marie D'Ancanto) is a character and heroine in the X-Men film series.

She is portrayed by Anna Paquin.

In Meridian, Mississippi, 17 year old Marie D'Ancanto and her boyfriend David are in her bedroom talking about their future after they graduate high school. As they begin to kiss, Marie somehow absorbs David's life force and begins to become weak and badly hurt. Marie begins to scream at what has happened and her parents come up in her room shocked at how her daughter could do such a thing. Knowing that she is a mutant, a human born with special powers, she changes changes her name to Rogue, runs away from home and goes to Laughlin City in North Alberta, Canada. As she stays at a bar/cage fighting arena, she sees a bunch of fighters getting defeated by another fighter known as "Wolverine".

As Wolverine is sitting down having a beer, a fighter who lost to him pulls a knife on him and tries to stab him. But as it turns out, Wolverine is a mutant just like Rogue and has metal claws that he uses on the knife man. Thinking that he can help her out, Rogue decides to stow away on his trailer. On a highway, Wolverine notices Rogue in her trailer and tells her to go away, but he later agrees to take her with him. While they drive, Wolverine reveals that his real name is Logan to Rogue and what their powers are. Meanwhile, as they continue to travel, a tree falls down in front of the trailer causing Wolverine to fly out of the trailer badly injured, but begins to rapidly heal as part of his mutation, and Rogue stuck in her seat.

As Wolverine begins to help Rogue, an evil mutant named Sabretooth, who works for another evil mutant named Magneto as part of the Brotherhood of Mutants, begins to attack Wolverine and Rogue, but is later stopped by two good mutants named Storm and Cyclops, who work for a good mutant alliance called the X-Men. Cyclops and Storm then rescue Wolverine and Rogue and take them to the X-Mansion, home of young mutant students and teacher who learn about controlling their powers and Professor Charles Xavier, head of the mansion and fellow mutant who has great telepathy.

Meanwhile, the United States Congress begins to declare the Mutant Registration Act, which will force all mutants to expose their identities and powers to the world. Senator Robert Kelly, creator of the act, is later kidnapped by Brotherhood of Mutants members Mystique and Toad and taken to their base. At the base, Kelly meets Brotherhood of Mutants leader Magneto, who begins to use a machine that artificially creates mutation by using his own power on Kelly. Kelly is then given artificial mutant powers and uses them to escape the base.

Back at the school, Professor Xavier tells Wolverine that Magneto wants him for some reason and will give him something after he figures out what it is that Magneto wants. Later that night, as Wolverine begins to have a nightmare of some awful experiment that he was involved in, Rogue goes into Wolverine's room to talk to him but Wolverine is startled and uses his claws on Rogue. Rogue then uses her powers on Logan to absorb his healing powers in order to heal herself. The next morning, a classmate named Bobby Drake comes to Rogue and tells her that Xavier is mad at Rogue for what she did and tells her that she needs to run away. But it turns out, this classmate is not the real Bobby Drake, but actually Mystique who has driven away Rogue for some reason. The X-Men then realize that Rogue has ran off and that Xavier was never really mad at her.

Xavier then uses Cerebro, a psychic locating device that can be used to find both humans and mutants, to find Rogue. Xavier finds her at a train station a few miles away from the school. Wolverine then goes and searches for her, despite Xavier's warnings about Magneto. Wolverine finds Rogue on a train and convinces her to stay at the school as it's the only place they can stay. As the train begins to leave the station, Magneto comes and attacks the train and Wolverine. As Wolverine asks what Magneto what he wants with him, Magneto reveals that he wants nothing to do with him and wants Rogue. Magneto then throws Wolverine out of the train, throws a sedative needle at Rogue, and has his men take her away.

Back at the mansion, Senator Kelly comes to the mansion looking for Dr. Jean Grey, a mutant living at the X-Mansion, for medical treatment. As the X-Men take him in, Xavier reads his mind to find out what Magneto did to him. The artificial mutation is killing off Kelly's cells and he eventually dies. Wondering what Magneto would do with Rogue, the X-Men realize that Magneto is going to transfer his power to her so she can project the mutation at a world summit on Ellis Island in New York City.

The X-Men suit up and head to Liberty Island where they suspect Magneto would place the machine. After fighting off Toad and Mystique, they head to the top of the Statue of Liberty to face of Magneto and Sabretooth. Magneto begins the machine and puts his hands on Rogue while she is in the machine to project the artificial mutation on the people on Ellis Island nearby. But Wolverine manages to stop Magneto and destroy the machine just in time before the innocents on Ellis Island are mutated. Though Rogue is safe, her hair has gained a white stripe. Rogue then goes back to the mansion and continues to live there and begins a relationship with the real Bobby Drake.

Rogue is first seen at a food court at a natural history museum hanging out with her boyfriend Bobby Drake and his friend John Allerdyce while the rest of Xavier's students are on a tour. After a feud with a couple of other boys causing Xavier to freeze time and get on to them, they soon learn that the White House has been attacked by a mutant. Back at the mansion, Rogue greets Wolverine who has come back from a trip on finding something about his lost past and he is left in charge of the children while Storm and Jean go find the mutant that attacked the White House and while Xavier and Cyclops visit Magneto in his plastic prison cell. Later that night, a military black ops team, lead by Colonel William Stryker, invade the X-Mansion and begin capturing some of the students. But the students are alerted about the soldiers and some of them escape, including Rogue, Bobby, John, and Wolverine. As Rogue, Bobby, and John escape the mansion with Wolverine, they decide to go to Boston, where Storm and Jean are along with Bobby's family. At Bobby's house, Bobby takes Rogue to his room and gives her some clothes to change into and some gloves in order to prevent her from hurting people from her touch. 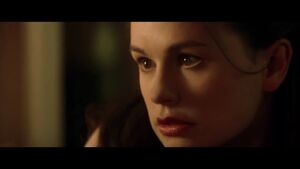 Rogue after getting her powers 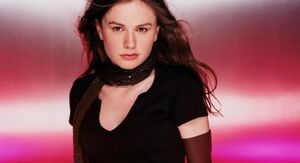 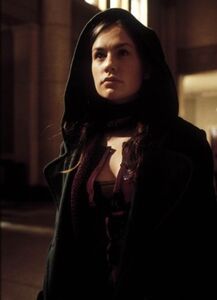 Rogue being comforted by Wolverine 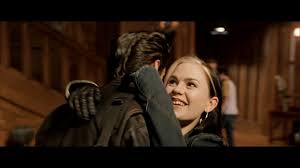 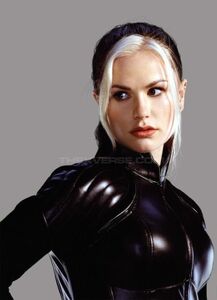 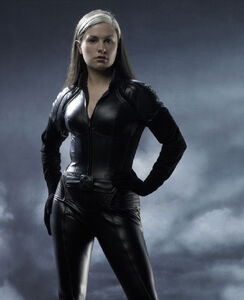 Rogue in X-Men: The Last Stand 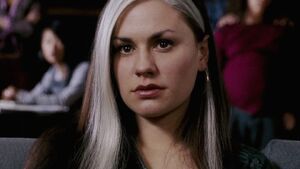 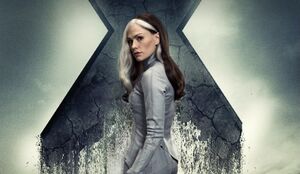 Rogue in X-Men: Days of Future Past 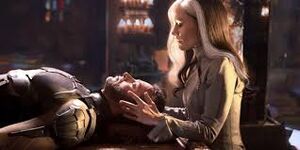 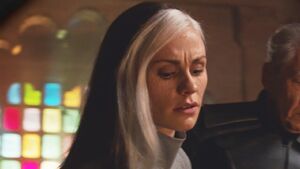 Rogue on the X-Men Movies Wiki