Rogue Cheney is a Mage of Sabertooth, formerly the strongest Guild in Fiore, and a member of its team: the Twin Dragons of Sabertooth. Originally a Dragon Slayer from four hundred years past, Rogue was sent to the future to assist in the destruction of Acnologia. Ashamed of the meaning of his name, as a child, Rogue referred to himself as Ryos.

Rogue is a slim young boy of average height with rather messy black hair, which almost reaches down to his shoulders, along with some strands pointing upwards on top of his head and a prominent tuft obscuring most of his forehead. His hair is later brushed to the right side of his face covering up his right eye. He has red eyes with slit pupils similar to that of a snake's, like Gajeel Redfox's eyes. Following the battle against the Dragons, Rogue gains a thin scar across the bridge of his nose. During the war against Tartaros, Rogue put his hair up in a ponytail, furthering his overall resemblance to his future self.

Rogue wears a long, black cape reaching down to his feet, with golden edges, a much lighter collar circling his neck, and a prominent, white ribbon hanging down on his chest. Said cape bears a light Sabertooth's symbol on it, almost in correspondence to Rogue's left shoulder. Below it, Rogue seems to wear a plain gray shirt with prominent brown cuffs and what looks like a large metal band circling each of his biceps. From a light sash circling his waist hangs a distinctive, pale blue cloth waistguard, consisting of four long pieces of cloth reaching down below his knees. Each of these pieces is adorned by a large, dark cross with fan-shaped arms. Below such waistguard, Rogue wears a pair of armored boots, which, on the front, bear plates bearing the very same motif which appears on the waistguard.

Following the Grand Magic Games, Rogue wears an outfit extremely similar to the one he wore before, however certain parts are reminiscent of his future self's own clothing, specifically the cloak, which is high collared and held closed at the sternum by a piece of fabric that stretches across his chest and is buttoned to the cloak on either side; it still retains the mark of Sabertooth on the left shoulder. The cloak, though, is like his old one and has a gold-colored trim. In place of the cloth tie he used in his last outfit, Rogue now has an ascot that is tied around his neck, but lies beneath the cloak instead of around it. Additionally, the cross-adorned cloth Rogue wears around his waist now pokes through his waistband, which is wrapped around him one extra time to make room for his katana, which he still carries.

As of the Tartaros-Fairy Tail war, Rogue's attire has changed drastically. He now wears a light-colored leopard-patterned kimono that only covers the right half of his torso, beneath which he wears armor that is light in the chest but dark everywhere else; the neck of the armor coils around his own and fastens there appropriately, and his left arm is left uncovered at the shoulder, exposing his Sabertooth mark. Around his waist is a very long sash that ties on the right side of his body and loops around the left, and holds a design-adorned piece of white fabric in place over the top of his loose, black pants. Around Rogue's left forearm is a black band that has a white ring over the wrist; he completes his outfit with black ankle boots, within which his pants are tucked. His katana is also noticeably absent.

Rogue is the quieter of the Twin Dragon Slayers. He mostly keeps a calm face and rarely shows any emotions, except for interest in Gajeel.

Although he is part of Sabertooth and one of their five strongest Mages, Rogue seems to question the way their guild handles things, namely failure and weakness, and holds a strong belief on camaraderie. After Yukino Agria lost her match against Kagura Mikazuchi and was subsequently humiliated and excommunicated by their Guild Master, he told Sting Eucliffe that despite her failure, she was still their comrade. Sting, whereas, merely brushes off Rogue's comment, suggesting that it's the way their guild works and gave the matter little thought. Rogue does, however, have a softer, caring side. When his Exceed partner, Frosch, started to fret over being excommunicated because of its lack of strength, Rogue smiles and denounces Frosch's fears as just that, promising that it would be okay as long it was with him.

Rogue also seems to lack the sadistic tendencies shared among several of his guildmates. When Lucy was being tortured by Minerva Orland, Rogue did not join in with his teammates' laughter. Rather, Rogue was looking away from the torture with a displeased expression, and he did not jump to Minerva's aid afterwards, unlike his team. He also appears to be unusually kind towards his guild and is very protective of Frosch. He and many of his guildmates were horrified at the "death" of Lector, showing that he cares for his fellow guildmates.

Additionally, like most other Dragon Slayers, Rogue suffers from motion sickness.

Katana: Rogue carries around a katana, a traditional Japanese sword, on his left hip, with its sheath tucked inside his sash belt. The weapon is fairly simple in appearance, sporting a tsuba whose shape is vaguely reminiscent of a four-leaf clover, and a hilt, wrapped in a traditional, dark tsuka-ito, which seems to get larger near its pommel. The sheath is dark in color.

Appearances in Other Media

At their guild, Rogue closes his eyes as Sting, now the Master of Sabertooth, demands Yukino to take her clothes off, however, he too removes his when Sting remarks that it's to play in their new pool. As they party, Rogue chastises Sting for splashing him (calling such a thing childlike), though he loses his cool when Lector arrives and informs everyone that Frosch got lost in the middle of a shopping trip. Immediately pinning the blame on Lector, Sting and Rogue then get into an argument, during which Rogue points out that Frosch doesn't know the way back to the guild; their argument is quelled by Yukino, who tells them that they just need to go look for the small Exceed.

Traveling to Magnolia, Lector tells Rogue that this is where he lost Frosch, which prompts Rogue to call out his friend's name. Just then, Rogue spots Gajeel and Panther Lily and angrily asks Gajeel if he's seen his companion; Rogue becomes angry once more as Gajeel refers to Frosch as a frog. As he tells Gajeel yet again that Frosch is a cat, he is corrected by Panther Lily, as Frosch is technically an Exceed, and when the Exceed points them in the direction of Frosch, Rogue and the others hurry along, where they eventually bump into Wendy Marvell, whom Rogue also harasses for Frosch's whereabouts. Such an act earns Rogue a reprimanding by Sting, and as Carla points them back in the direction, Rogue continues calling out for his friend. Before long, the group of four finds Frosch standing in front of a sign and stops his friends from going to help him, but as he does so, he accidentally grabs Yukino's breast, which he embarrassingly apologizes for.

Immediately moving back to the matter at hand, Rogue points out that Frosch is looking at a map so that it can return to the guild by itself; Rogue announces that he must allow Frosch to return by itself, both for its sake and his own, something which Lector and Sting remark is impossible for the bumbling creature to do, causing Rogue to yell in favor of Frosch's success. Cheering for him from the sidelines as it runs into Juvia Lockser, Gray Fullbuster and Erza Scarlet, Rogue smiles rather smugly as Frosch makes progress. However, night falls and Rogue watches Frosch stumble toward the Fairy Tail Guild where he cries out in misery, exclaiming that it arrived at the wrong guild. 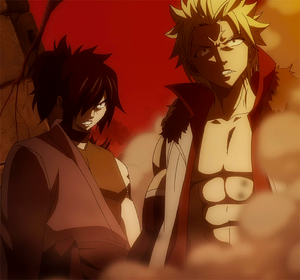 Rogue and Sting express their anger with Mard's actions 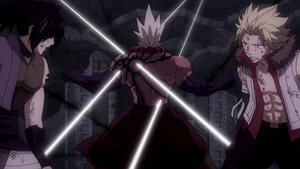 Rogue and Sting defeat Jiemma
Add a photo to this gallery

Retrieved from "https://hero.fandom.com/wiki/Rogue_Cheney?oldid=2150304"
Community content is available under CC-BY-SA unless otherwise noted.