Intelligence
Heaven's Door:
Speed
Ability to turn someone into a book

Be a successful mangaka

Rohan Kishibe is a side character introduced in Diamond is Unbreakable, the fourth part of JoJo's Bizarre Adventure. He's also the main protagonist of Thus Spoke Kishibe Rohan and the one-shots Rohan at the Louvre and Rohan Kishibe Goes to Gucci. First featured as an antagonist, he becomes an ally in the search for Yoshikage Kira.

Rohan is a successful mangaka, conducting research for his latest manga. He is also a Stand User who wields Heaven's Door, which allows Rohan to transform others into books to gather information about them to read as inspiration for his manga.

He is voiced by Vic Mignogna in Diamond is Unbreakable, who voiced Edward Elric, and Landon McDonald in Thus Spoke Kishibe Rohan. And in Japanese he is voiced by Takahiro Sakurai who also voiced Cloud Strife.

Rohan is has a slim average height of a young man. with his bizarre green in a slicked-sideways undercut. He has well made sculpted face with a sharp cheek bones and delicate eyebrows. While his eyes are light green in The anime and the OVAS, there are heterochromatic in the Colored Manga OVAS with ones being blue and gold. He also wears lipsticks with it and his outfit changes regularly.

Heaven's Door is a weak close-range Stand unsuited for direct combat, but has several powerful abilities. For an inquisitive mangaka like Rohan, Heaven's Door is a handy way to gather research material out of people's pasts without the hassle of an interview.

During its introductory arc, Heaven's Door acts when Rohan's target sees it or an image of it drawn by him, which he can make in mid-air, with a pen or with his finger. 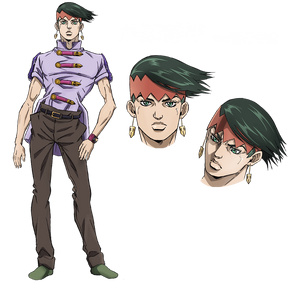 Rohan at the Villains wiki

Retrieved from "https://hero.fandom.com/wiki/Rohan_Kishibe?oldid=2294333"
Community content is available under CC-BY-SA unless otherwise noted.