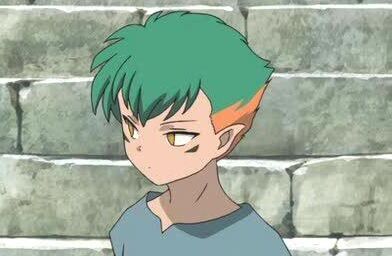 Roku is a hanyou, and one of the protagonists from the movie Inu Yasha: Fire of the Mystic Island.

Roku was one of the inhabitants of a magical island that lay off the coast of Japan. This was cut off from the outside world by a magical barrier because it was a peaceful place where humans and benign youkai lived together in peace and harmony, so many hanyou were born.

But four malicious and very powerful youkai, the Shitoshin, attacked the island one day, killing most of its inhabitants. Only a few hanyou children were spared, and were regularly thrown into a magical oven by the Shitoshin to sacrifice their strength.

At the beginning of the plot, Inuyasha and his friends come to the island, where they find Roku and five other hanyou children, as his twin brother Dai. The Shitoshin attack them immediately, but Inuyasha and his friends can defeat them one after the other. And Roku, who had given up hope, like most of the other children, regained the courage to fight the Shitoshin. Together with the other children, he built a raft on which they could finally leave the island.

Later, they move to a secret and remote place to live in peace and quiet.

Retrieved from "https://hero.fandom.com/wiki/Roku_(Inuyasha)?oldid=1624495"
Community content is available under CC-BY-SA unless otherwise noted.