Recrutating new recruits for his army

Recruting new soldiers for his army

Rolento F. Schugerg (ロレント ・ F・シュゲルグ), more commonly referred by his first name, is a video game character, as well as an anti-hero from both the Final Fight and Street Fighter series. Like Sodom before him, he first appeared as a boss character in the first Final Fight, but later evolved into a playable fighter in Street Fighter Alpha 2.

Rolento is a former member of a special forces unit known as The Red Berets. He is highly trained in special military martial arts and using a baton in combat. After joining Mad Gear, Rolento is put in charge of the armory-producing plants in Metro City's industrial area. After the fall of Mad Gear, he tries to create his own nation by laying siege on Metro City with his private army, but he eventually fails. After being defeated by Guy, he gains a scar on his face caused by a shuriken thrown by Guy. Holly Wood and El Gado are the primary foot soldiers in Rolento's army, and were both trained by Rolento himself. El Gado and Holly Wood are both highly trained in knife combat and have a special technique known as the "Jumping Knife Attack".

Before the events of Street Fighter Alpha 2, Rolento decides he is no longer content with being a lackey for Mad Gear, and sought to create his own utopian nation. After Rolento leaves Mad Gear, Sodom tries to convince him to rejoin, but Rolento refuses. Rolento also encounters Guy during SFA2, but the conclusion of the battle is unknown. After SFA2, Rolento attempts to start his own nation in Metro City and drives a tank through the business district to start off his endeavor. Mayor Mike Haggar is called to stop him.

In Street Fighter Alpha 3, Rolento is looking for powerful warriors to join his army, in particular, Cody, who he remembers from their previous battles. When he finds Cody in a prison uniform and handcuffs, Rolento is disheartened. He wants the hero from back in the day, not a loner convict, but Cody refuses to join anyway. Rolento manages to steal weapons from Shadaloo for his army, and soon stumbles upon M. Bison's psycho drive. He learns the Psycho Drive brainwashes people, and decides against using it because he can't have a successful utopia if people can't make their own decisions. Sodom tracks down Rolento after the tournament. After hearing Rolento's ambitions, Sodom realizes that Rolento did not lose sight of Mad Gear's ideals after all. The two decide to work together once again to create a great Utopian nation.

Rolento makes an extended cameo appearance in the fourth episode of the anime Kaitou Tenshi Twin Angel, hiding in the bushes during the night and trying to take pictures of women in uniform (to him, ordinary girls "become saints" in uniform). The Twin Angels find him, shoot an arrow at his camera, and begin to pursue him. They are stopped when someone takes their picture, not realizing that the angels are her friends; the flash gives Rolento plenty of time to escape.

Later on, the Twin Angels go undercover to investigate gunshots and spot Rolento, who has taken over a family restaurant with three accomplices who also escaped the Twin Angels' clutches. When Rolento demands that they enter so he can take pictures and add them to his photobook, their teacher poses as one of them, creating a diversion that allows the Twin Angels time to escape and transform.

Later, their friend from earlier challenges Rolento to see who would take better pictures; at that moment, the Twin Angels enter, prompting him to charge towards them, wanting to take pictures. The duo agrees under the condition that their faces remain censored, and Rolento and his crew take several pictures of them posing while holding a black bar over their eyes. He eventually begins ignoring one in favor of the other, angering her into blowing up the restaurant. Rolento survives the explosion, and is last seen laying the on the floor, smiling dizzily. 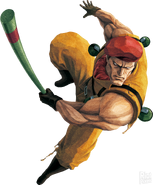