Rolf is an orphan and the main character of Phantasy Star II and an agent in Paseo, the capital of Motavia.

He has blue hair, blue eyes and pale skin.

He primarily dresses in blue and wears a silver headband.

He has the ability to wield swords and can use techniques like foi, gifoi, nafoi, and gizan.

He has been haunted by a nightmare every time in his sleep where he witnesses a girl fighting a giant demon, but he cannot move or talk as he watches the demon striking down the girl. He wakes up just as the girl is fighting for her life.

He wakes up in his room which was dimly lit by the early morning, filled with incredible sadness. He shakes it off as he has no time to worry about the nightmare, especially with Mother Brain being in charge of the environment.

He opens his window for a deep breath of fresh air as it seems to wash away the bad feelings left by his dream.

He dresses up and heads off to meet his superior, the commander of Motavia, Having worked for nearly two years. 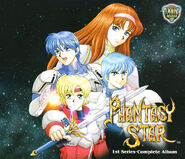 Group photo featuring Rolf.
Add a photo to this gallery

Retrieved from "https://hero.fandom.com/wiki/Rolf_(Phantasy_Star_II)?oldid=2240461"
Community content is available under CC-BY-SA unless otherwise noted.