Genius
Roll Caskett is a character from the Mega Man Legends series based on Roll from the original Mega Man series. She is a 14 year old girl, and was raised together with Mega Man Volnutt, her best friend. Roll is a caring person and is always concerned with Mega Man's safety when he is on a digout.

She was voiced by Keiko Yokozawa in the Japanese version, and by Tracy Ryan in the English version.

Roll is an enthusiastic genius mechanic and can create, repair, modify, and pilot almost any type of machine. She is in charge of piloting and maintaining her family's airship, the Flutter, and is shown piloting other vehicles. Roll is also Mega Man's Spotter; she gives him information via radio based on what she can see with her equipment. She builds new parts for him, including Special Weapons and Buster Parts, from what he finds on his digs.

Roll Caskett appears in Super Smash Bros. Ultimate as a advanced support spirit that increases the user's shooting attacks. Her spirit battle is on the Pilotwings stage against Isabelle and Diddy Kong

Roll with her hat off. 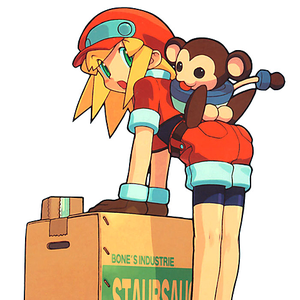