Roman and The Joker

Roman Pearce is a professional street racer and one of the protagonists & the pentagonist in The Fast and The Furious franchise. He is the deuteragonist of 2 Fast 2 Furious and one of the tritagonists in Fast Five, Fast & Furious 6, Furious 7, and The Fate of the Furious. He is a childhood friend of Brian O'Conner and is portrayed by singer and actor Tyrese Gibson, who also portrayed Robert Epps in the Transformers film series.

Not unlike Brian, Roman turned to a life of crime and began stealing cars. When Brian joined the Los Angeles Police Department, Roman presumably distanced himself from Brian, considering him the "enemy". Two months into Brian's career as police officer, Rome was arrested for housing stolen cars in a garage.

Roman believed that Brian, who was unaware of his arrest, could've done something to help him. While in prison, Roman later came to resent Brian.

Roman spent three years in an upstate prison and was later released on house arrest. He was not allowed to move beyond a hundred yards from his home, a trailer home. He wore a monitor on his ankle leg that prohibited his movement. Roman was later employed as a driver for a Demolition Derby in Barstow.

Following Brian's arrest in Miami by Special Agent Bilkins and U.S. Customs Agent Markham, Brian agreed to help Bilkins and Markham expose and arrest drug lord, Carter Verone, if he could choose who would go undercover with him. Bilkins and Brian traveled to Barstow where Roman was making a living a demolition derby driver. When Roman won the derby, he spotted Brian in the stands with Bilkins and headed for his RV.

He ignored Brian's calls until he used his nickname, "Rome". Taking offense, Roman reminds Brian that only his friends could call him "Rome" and called Brian a pig. Brian clarified that he wasn't a cop any longer. Following Bilkins's confirmation that it was true, Roman punched Brian when he continued to try acknowledge Roman as his friend.

Roman was overpowered by Brian in their fight, but refused to listen Brian when he tried to convince him to come with him to Miami to earn his freedom. It was not until Bilkins again confirmed that Brian's offer was legitimate that Roman obliged the deal to have his criminal record expunged in exchange for his help.

After meeting with Monica Fuentes, an undercover U.S. Customs agent in a relationship with Verone, Roman remained standoffish with Brian during their undercover roles as Carter Verone's new drivers. He acclimated to his new environment and developed a friendly rapport with Suki and Tej Parker.

In the company of Monica and the U.S. Customs and FBI agents, he questioned Brian's dedication to the undercover sting whenever he interacted with Monica, reminding his friend that he often got in trouble because of his relationship with women. Brian dodged Roman's questions regarding Dominic Toretto, the criminal he let go free during his tenure as a police officer, and Roman held his actions against him. Monica warned Brian and Roman that Verone planned to kill them once his money was delivered to drop off point, then assumed to be the airstrip.

Brian and Roman work with Tej to lose Bilkins's and Markham's tracking devices on their Mitsubishi Lancer Evolution VIIand Mitsubishi Eclipse Spyder. During that time, Roman finally takes responsibility for the actions that led to his arrest and reconciles with Brian, who he longer blames. Brain admitted that letting Dominic Toretto go was largely motivated by the guilt he harbored for being unable to help Roman. With help from Tej, they orchestrate a "scramble", after driving into a garage they later have hundreds of race cars coming out, having switched cars with Tej and Suki while in the garage.

Roman heads for the airstrip as planned, but is warned by Brian that changed had planned. Roman talks, distractingRoberto, one of Verone's men, long enough to use the nitrous trap in the passengers seat to eject Robert from the car. Head heads for the docks and knocks out one of Verone's men before he helps Brian with Enrique, who attempted to shoot Brian in the 1969 Yenko Camaro SYC. Roman and Brian save Monica, driving the Yenko off the top of the docks and crash the vehicle into the boat Verone was using to escape the authorities. Roman's arm was broken in the process, but they were able to help Monica, who later apprehends Verone.

After the arrest of Verone, Roman and Brian's criminal records are cleared. Roman and Brian reveal that they've taken their share of Verone's money and planned to open up a high performance garage in Miami together.

Roman traveled to Rio de Janeiro when he is contacted by and Brian, Mia and Dominic Toretto. He was recruited on account of his skills as "fast-talker", in their attempt to steal $100 million from a corrupt Brazilian businessman.

He is reluctant at first, thinking the mission is personal and not being good business until Dominic announces that the score is $100 million, Tej adding that his cut would be a little over $11 million.

Convinced that the benefits of the score outweighed the risks, Roman decided to help Toretto's crew. With his share of the money he buys a Koenigsegg CCXR from a sheikh in Abu Dhabi, as well as his own private jet.

Roman is called away from his respective life of comfort and privilege to help Dominic and Brian bring Letty Ortiz, Dominic's wife, back into the fold, after DSS agent Luke Hobbs learns that she is alive and living in London. Roman was on his way to Macau when he was contacted by Dominic. Roman immediately reunited with the crew in London with Hobbs and Riley. They learned Shaw's crew was building a Nightshade device, which can disable a country's military communication grid for 24 hours, endangering countless lives and they were only one component away from finishing it. Hobbs offered them a chance to reunite with Letty, who was presumed dead, but Brian pushed the negotiations one step further for full-pardons to every member of the crew.

Later they attempted to capture Shaw's crew but failed due to the advanced equipment of Shaw's crew. They were however, able to learn about the makeup of the Flip Cars Shaw's crew utilized just from hearing their engines and seeing their performances. Using this, Rom, Riley, Han and Gisele were able to track down the manufacturer. They were however, ambushed by Shaw's men but were able to retrieve more information and find out Shaw was working withBraga. Brian left to the United States under the alias of a fake criminal to interrogate Braga while the rest of the crew found out Shaw's hide out. Though it was abandoned, they deduced he was after their final component in an army base in Spain. As they were about to leave, Brian made it back just in time to join them. Upon finding out one of Shaw's men was "caught", Brian, using the information from Braga, deduced Shaw wanted it to happen. Tej, who was talking with Hobbs, told the crew they were following protocol and transporting the component to a safe location. Having realized this, the crew deduced Shaw wasn't after the base, but the convoy transporting the component. Instead of rendezvousing with Hobbs they crew went to escort the convoy. They were too late as Shaw's crew already took the convey only to find the component was inside a tank. Roman drove in front of the tank and Shaw's crew tried to shoot him but he narrowly dodged it, but it resulted in his car being disabled by the tank. Roman was able to use a cable to link his car to the tank before jumping onto Brian's car. Brian then used Roman's destroyed car as an anchor by pushing it over a bridge, disabling the truck and Shaw's crew was arrested. However, Shaw had a backup plan. Using Mia's life, the crew was forced to let him go. However, Tej disabled all communication grid and the crew pursued Shaw once again so he can't contact the his men to kill Mia. They saw Shaw was planning to escape via airplane. After a length chase, Brian was able to use Tej's hook gun to attack the plane's flap, preventing it from taking off and destroyed it. As promised, the crew was issued full pardon for their previous crimes and had a meal at the Toretto house with Roman saying grace, honoring Gisele, who died while helping the crew take down the plane.

During the events of 2 Fast 2 Furious, Roman is still dealing with the knowledge that childhood friend, Brian O'Conner, has become a police officer and did not use his power as an officer to help him while in prison. By default, Roman does not trust the police and considered anyone who entered their ranks the "enemy". In general, Roman has a problem with authority figures or individuals who use their power and privilege to undermine him.

Roman holds grudges and is not lenient toward anyone who he feels betrayed him. However, Roman has a tendency to blame others for consequences from his own actions, and will avoid taking responsibility for those actions on account of his pride. His relationship with Brian suggests a strong bond of trust fostered from their youth. Following their reconciliation, Brian revealed the reasons that led him to let Dominic Toretto go in Los Angeles was connected to the guilt of not being able to help him.

Roman is not of the mind that personal vendettas and business ventures are a wise unions, but is not against mixing the two when great sums of money are involved. When he is not preoccupied with his anger, Roman often allows his ego to get the better of him and as a result, he is often picked on, his physical features (such as his forehead) exaggerated for jokes. Roman's strongest suit is often his mouth. Roman's sense of humor is often disarming to strangers who question the motives of the crew, or make assumptions about his temperament based on his record with Dominic Toretto. His need to be the center of attention and hear himself speak can be used to distract opponents during scores or other situations.

Roman also tends to be somewhat impulsive. This was shown when he was playing with a new weapon Tej developed from Shaw's crew, narrowly missed Dom and Han.

Despite his goofy personality, Roman is quite capable of contributing majorly to the crew. He was capable of identifying the engine type of Shaw's crew after one encounter. This was due to his vast history with cars. Another notable skill is his fast talking skill. This skill earned him a place among the crew since he could talk his way out of any situation. He can also draw the attention of large crowds to himself, enabling his crew to slip past security or anything else that could inhibit their mission.

1970 Dodge Challenger R/T
Add a photo to this gallery 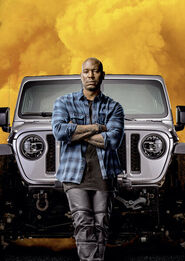 Roman in Fast & Furious 6.
Add a photo to this gallery

Retrieved from "https://hero.fandom.com/wiki/Roman_Pearce?oldid=1783928"
Community content is available under CC-BY-SA unless otherwise noted.