To become the next WWE World Heavyweight Champion (Succeeded)

Leati Joseph "Joe" Anoa'i or commonly known under his ring name as Roman Reigns, is a professional wrestler and former Canadian football defensive tackle. He is signed to WWE. Anoa'i is a former villain and a shield member alongside Dean Ambrose & Seth Rollins, he is now one of the protagonist in the show. Reigns is the only wrestler, aside from Undertaker, who is able to go toe-to-toe in hand-to-hand combat with a athlete with extreme strength & durability, such as Brock Lesnar, Kane or Braun Stowman.

Reigns is one of two sons of Sika from the Wild Samoans. Roman and his brother Matt are both professional wrestlers, Roman is related to other pro wrestlers like the Rock, The Usos, and a few others. Reigns/Anoa'i is both married and a father. Anoa'i studied management at the Georgia Institute of Technology.

Roman Reings is also the cousin of legendary professional wrestler Dwayne "The Rock" Johnson. Charisma runs in the family, as Roman Reigns is arguably more charismatic than his cousin The Rock. The Rock came to the aide of his cousin during the 2015 Royal Rumble to defeat the evil, ugly Russian Russev and the 2 ugly giants Big Show and Kain.

"You are a sniveling, little suck up sell out full of sufferin' succotash, son! I know, that was not easy to say!"

Face turn and the Break up of the Shield

The feud with Kane also prompted The Shield to sever ties with Triple H, who reformed Evolution to counter them. The Shield defeated Evolution at both Extreme Rules and Payback.

After Batista "quit" WWE the following night on Raw, Triple H initiated his "plan B" which involved Rollins turning on The Shield and aligning himself with Triple H and The Authority.

Rise to Higher Status in WWE

After the dissolution of The Shield in June 2014, Reigns (now a singles wrestler) was quickly inserted into world title contention that month,and he headlined the next two pay-per-views; the first when, two weeks after Rollins' betrayal, Reigns won a battle royal on anepisodeRaw to gain a spot in the vacant WWE World Heavyweight Championship ladder match at Money in the Bank, but failed to win the title during the main event match. The second pay-per-view was  Battleground, where Reigns again unsuccessfully challenged for the world title, this time in a fatal four-way main event match (also involving Kane, Randy Orton and defending champion John Cena).

The following night on Raw, Reigns started a feud with Randy Orton, which led to a match between the two,, at SummerSlam, where Reigns defeated Orton. Meanwhile, Reigns' former team-mates Dean Ambrose and Seth Rollins had been feuding over Rollins' betrayal, with Rollins beating Ambrose in five matches andtimately injuring Ambrose in the storyline.

This led to a feud between Rollins and Reigns, where a singles match was set up for Night of Champions. However, six days before the pay-per-view, Reigns cleanly defeated Rollins in a singles match on Raw. Then, Reigns developed a legitimate incarcerated hernia which required surgery a day or two prior to Night of Champions, and as a result, Rollins was declared the winner via forfeit, while Reigns was ruled out of action indefinitely.

Reigns returned to WWE television on the December 8 episode of Raw, accepting the 2014 "Superstar of the Year" Slammy Award. Six days later at TLC: Tables, Ladders and Chairs, when Big Show interfered in John Cena's match against Seth Rollins, Reigns attacked both Big Show and Rollins, helping Cena win. This started a feud between Reigns and Big Show,in which Reigns defeated him multiple times by countout and disqualification. At the Royal Rumble PPV , Reigns, entering at number 19, won the 2015 Royal Rumble match by eliminating the other entrants in the final four: Big Show, Kane and Rusev.

On the February 2 episode of Raw, Reigns suffered his first pinfall loss in a singles match on the main roster when Big Show defeated him after interference from Rollins. Reigns was then forced to defend his WrestleMania title shot against Daniel Bryan in the main event of Fastlane, and succeeded in doing so after beating Bryan via pinfall. On March 29, at WrestleMania 31, Seth Rollins cashed in his Money in the Bank contract while Reigns' main event match with Brock Lesnar was in progress, turning it into a triple threat, which Reigns lost when he was pinned by Rollins.

In April, Reigns re-ignited his feud with Big Show, which Reached its climax in a Last Man Standing match at Extreme Rules, where Reigns defeated Show. In May, at Payback, Reigns once again failed to win the world title from Rollins in a fatal four-way main event that also involved Orton and Ambrose. On June 14, at Money in the Bank, Reigns competed in the Money in the Bank ladder match, which he failed to win after Bray Wyatt interfered and attacked him.

Around a month later, Wyatt defeated Reigns at Battleground, after former Wyatt Family member Luke Harper attacked Reigns. On the August 6 episode of SmackDown, Wyatt accepted Reigns' challenge to a tag team match at SummerSlam, with Reigns and Ambrose facing Wyatt and Harper. Reigns pinned Wyatt at the event, and the following night on Raw, in a rematch, Reigns and Ambrose was attacked by Wyatt's new ally, the debuting Braun Strowman. In September, at Night of Champions, Reigns and Ambrose teamed with Chris Jericho and were defeated by Wyatt, Harper and Strowman. The feud between Reigns and Wyatt ended after their Hell in a Cell match at the Hell in a Cell pay-per-view on October 25, in which Reigns was victorious.

On an episode of Raw, Reigns won a fatal four-way match (also involving Alberto Del Rio, Dolph Ziggler and Kevin Owens) to become the number one contender for the WWE World Heavyweight Championship. However, on November 4, then champion Seth Rollins injured his knee and vacated the title, which led to a tournament to crown a new champion. Following this, Triple H attempted to persuade Reigns into joining The Authority by offering him a WWE World Heavy Weight Championship which Reigns declined. He then defeated Big Show in the first round, Cesaro in the quarterfinals, Alberto Del Rio in the semifinals and Dean Ambrose in the finals at Survivor Series, to win the WWE World Heavyweight Championship for the first time. Triple H attempted to offer a handshake, but Reigns hit him with a spear and Sheamus then cashed in his Money in the Bank contract and pinned Reigns, thus ending Reigns' reign at only 5 minutes.

Reigns then failed to regain the title from Sheamus in a Tables, Ladders, and Chairs match at TLC, after being helped by his fellow League of Nations members Alberto Del Rio and Rusev; subsequently, Reigns would attack the trio and also Triple H, who came out to stop him.

The next night on the December 14 episode of Raw, Mr. McMahon granted Reigns a title rematch against Sheamus, with Reigns' career on the line, and after overcoming McMahon, Del Rio and Rusev's interferences, Reigns defeated Sheamus and regained the WWE World Heavyweight Championship. On the January 4, 2016 episode of Raw, Reigns successfully defended his title against Sheamus, despite McMahon acting as the special guest referee. Reigns was then slated to defend his title in the Royal Rumble match at the Royal Rumble pay-per-view, where Reigns scored a total of five eliminations after entering first, heading backstage for much of the match after an attack by the League of Nations, and was eliminated upon his return by eventual winner Triple H, thus losing the world title.

At Fastlane, Reigns pinned Dean Ambrose in a triple threat match also involving Brock Lesnar, to receive a WWE World Heavyweight Championship match against Triple H at WrestleMania 32, where he defeated Triple H in the main event to become the WWE World Heavyweight Champion for a third time. Earlier in March 2016, Reigns changed his ring entrance to the entrance ramp instead of coming out through the crowd.

For this third world title reign, Reigns had two successful televised title defenses in May against AJ Styles: at Payback and then Extreme Rules. Right after the Extreme Rules match against Styles, Reigns was attacked by a returning Seth Rollins. Near the end of his reign.  At Money in the Bank , Reigns was defeated by Rollins, ending his title reign at 77 days.

Demotion to the Mid card

At the 2016 WWE draft, Reigns was drafted to Raw. Despite Reigns' suspension, WWE continued to advertise Reigns as part of the Battleground main event. On July 24 at the Battleground pay-per-view, Reigns made his televised return, facing Rollins and Dean Ambrose (whom Rollins dropped the title to at Money in the Bank after Ambrose cashed-in his Money in the Bank contract) for the now-renamed WWE Championship. but Ambrose successfully retained the championship when he pinned Reigns in a clean finish. The following night on the July 25 episode of Raw, Reigns also failed to contend for the newly announced WWE Universal Championship against Rollins at SummerSlam, as he lost in the main event against the debuting Finn Bálor after earlier winning a fatal four-way match that involved Chris Jericho, Sami Zayn, and Sheamus that same night.

In August, Reigns turned his attention away from the renamed WWE World Championship and the new WWE Universal Championship as well, instead challenging Rusev for the United States Championship by attacking him after a promo on the August 1 episode ofRaw. The following week, Reigns interrupted Rusev and Lana's wedding re-enactment, and issued a challenge to Rusev for the title. Rusev declined, and the two brawled, causing Lana to fall into a wedding cake. Backstage, Mick Foley told an angered Lana and Rusev that Rusev would be defending his U.S. title against Reigns at SummerSlam. 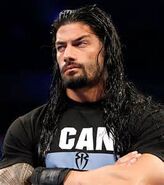 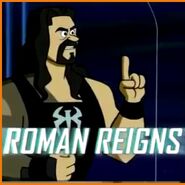