Hanging around with his close friends, Hermione Granger and Harry Potter

Ronald Bilius "Ron" Weasley (born March 1, 1980) was a pure-blood wizard, and the sixth son of Molly and Arthur Weasley, and the deuteragonist of Harry Potter Franchise. He was also the younger brother of Bill, Charlie, Percy, Fred and George, and the elder brother of Ginny. Ron and his brothers and sister live in The Burrow where Harry and Hermione stay quite often. Ron began attending Hogwarts School of Witchcraft and Wizardry in 1991 and was sorted into Gryffindor house. He soon became best friends with fellow student Harry Potter and later Hermione Granger.

At the end of the series, Ron marries Hermione and has two children with her named Rose and Hugo.

He was portrayed by Rupert Grint in all eight Harry Potter movies.

Ronald is something of the runt of the litter of the Weasley family. Growing up with five older brothers, he has a need to prove himself to the rest of his family which is why he was happy to become a prefect and whenever he looked into the Mirror of Erised, he would himself winning a Quidditch match which ironically he began to play in the Sixth year.

Ron has a stereotypical relationship with his elder brothers, except for Percy whom he utterly despised as he left the family to join the Ministry of Magic. Ron interacts the most with Fred and George, the two constantly antagonize him which was shown when they mocked Ron over dancing with McGonagall and charging him twice as much for a practical joke item at their store but despite this he was left screaming in tears when Fred had died during the Battle of Hogwarts. He was the older brother of his sister Ginny and was incredibly protective over her, so much that he instantly despised any boy who even thought about dating her (with the exception of his best friend Harry). His love for Ginny was so strong he was willing to open the Chamber of Secrets to rescue her.

Ron can be quite jealous at times. He suffered from arachnophobia and an inferiority complex, he was pathologically afraid of spiders and was left petrified when entering the Black Forest's nest of spiders. In Lupin's class when being confronted by a Boggart, it took the form of a giant arachnid. When finally retrieving the Sword of Godric Gryffindor and Tom Riddle's Horcrux peers into his mind, it is revealed that Ron's beloved mother wanted a daughter instead of himself which furthers his need to prove himself. This inferiority complex pans out when he developed romantic feelings for his close friend Hermione Granger and thought Harry felt the same way, Ron truly believed he had no chance with "the Chosen One" and caused him to be cold and even aggressive towards his friend.

Despite his pure-blood status, Ron wasn't overly righteous and unlike the Malfoys he wasn't prejudiced to half-bloods such as Hermione. He would never have used the unforgivable word "Mudblood" and when Draco said this to Hermione, he attempted to hex the bully only for it to deflect back to him due to his broken wand.

At times Ron can be a "right foul git" as Harry liked to put it. When Harry's name was placed in the Goblet of Fire, he was left angered as his best friend didn't inform him that he did so and wanted worldwide fame all for himself while rudely telling him to "piss off" and becoming colder and distant towards Harry until it went as far that they wouldn't exchange two words to one another. This had an effect on Hermione as well, she had to act as a peacekeeper between the two but eventually after seeing the first round in the Triwizard Tournament he apologizes for the way he acted. This only worsened when the three came into possession of Lord Voldemort's Horcrux which caused his jealousy and anger to worsen than ever until they point where he berates Harry and destroys their friendship only for him to regret it instantly after. Fortunately, Harry and Ron are able to mend their relationship after he saved his life.

Ron doesn't always take other people's feelings into consideration, he is either ignorant or just plain selfish. An example of this is during Harry and Ron's standoff during their fourth year and he didn't care about the strain it had on Hermione. Another time is when he began a relationship with Lavender in the sixth year and was ignorant to the fact that Hermione had a crush on him.

While Ron isn't always as fearless as Harry or Hermione and as such was the last person of the trio to actually say Lord Voldemort's name and stuck with He Who Shall Not Be Named or You-Know-Who (but this was mostly due to the fact that saying his name is a jinx). Ron is a loyal and even selfless boy who'd risk his life for life for his friends this was shown when Harry, himself and Hermione were searching for the Philosopher's Stone and to get closer they had to complete a giant game of chess so Hermione and Harry could pass which shows that he would put his own safety on the line for the greater good.

Ron is somewhat socially awkward and shy, on the fourth year he had difficulty asking for a date and when trying to ask Hermione out, he opens by saying "Hermione, you're a girl." He lacks confidence and because of this he wasn't above cheating, when he believed that Harry had spiked his juice with "liquid luck", he gulps the drink down but in reality it was never opened which shows that all Ron needs is self-confidence.

Ron can be slightly foul-mouthed at times, this was shown when he was angry at Harry for supposedly entering the Triwizard Tournament and told him to "piss off." He is quite hostile to Draco Malfoy, telling him to "shove off" and once calling him a "bastard."

Furthermore he is somewhat reckless, as when he broke Harry out of the Dursley's house using a flying car and then attempting to catch up with the Hogwarts Express with the same vehicle which causes them to be seen by seven muggles. This also shows during a Quidditch match and Harry's broom span out of control and he attempted to fix it despite the fact his wand was broken and the spell wouldn't work. 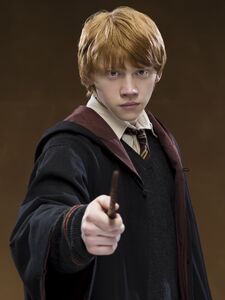 Ron Weasley in Harry Potter and the Order of the Phoenix. 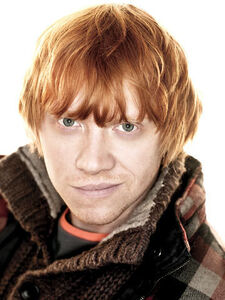 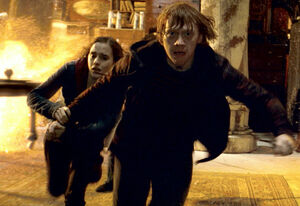 Hermione and Ron run away after Goyle set the Room of Requirement on fire.

Ron, Hermione and Harry screaming at Fluffy, the vicious three-headed dog.
Add a photo to this gallery

Retrieved from "https://hero.fandom.com/wiki/Ron_Weasley?oldid=2278676"
Community content is available under CC-BY-SA unless otherwise noted.