Being the symbol of America

Optimistic mascot clown
Ronald McDonald is a clown character used as the primary mascot of the McDonald's fast-food restaurant chain. In television commercials, the clown inhabits a fantasy world called McDonaldland, and has adventures with his friends Mayor McCheese, the Hamburglar, Grimace, Birdie the Early Bird, and The Fry Kids. In recent years, McDonaldland has been largely phased out, and Ronald is instead shown interacting with normal kids in their everyday lives.

Many people work full-time making appearances in the Ronald McDonald costume, visiting children in hospitals, and attending regular events. There are also Ronald McDonald Houses, where parents can stay overnight when visiting sick children in nearby chronic care facilities. Since August 2003, McDonald has been officially styled as the "Chief Happiness Officer" of the McDonald's Corporation.

The origin of Ronald McDonald involves Willard Scott (at the time, a local radio personality who also played Bozo the Clown on WRC-TV in Washington, D.C. from 1959 until 1962), who performed using the moniker "Ronald McDonald, the Hamburger-Happy Clown" in 1963 on three separate television spots. These were the first three television ads featuring the character.

Scott, who went on to become NBC-TV's Today Show weatherman, claims to have "created Ronald McDonald" according to the following excerpt from his book Joy of Living:

At the time, Bozo was the hottest children's show on the air. You could probably have sent Pluto the Dog or Dumbo the Elephant over and it would have been equally as successful. But I was there, and I was Bozo ... There was something about the combination of hamburgers and Bozo that was irresistible to kids ... That's why when Bozo went off the air a few years later, the local McDonald's people asked me to come up with a new character to take Bozo's place. So, I sat down and created Ronald McDonald.

McDonald's does not mention Voorhis or claim that Willard Scott created Ronald in their statement:

In 1965, Roy Burgold assigned Aye Jaye as Boss Clown worldwide in charge of hiring, writing, creating shows, media handling, training, and major events such as The White House appearances, Macy Days, etc., and finally opening Ronald worldwide for 35 years. Aye Jaye was responsible for the hiring of hundreds of past field Ronalds.

Circus performer Coco the Clown (real name Michael Polakovs) was hired in 1966 to revamp Ronald's image, and it was he who created the now familiar costume and make-up.

In 2010, the Corporate Accountability International in Boston, Massachusetts suggested Ronald McDonald should retire due to childhood obesity, however McDonald's CEO Jim Skinner said there are no plans to retire Ronald McDonald.

At any given time, there are dozens to hundreds of actors retained by McDonald's to appear as Ronald McDonald in restaurants and events. It is assumed, however, that the company uses only one actor at a time to play the character in national television commercials. Following is a list of such primary Ronald actors.

Various forms of the name "Ronald McDonald" as well as costume clown face persona, etc. are registered trademarks of McDonald's. McDonald's trains performers to portray Ronald using identical mannerisms and costume, to contribute to the illusion that they are one character.

McDonald's marketing designers and stylists changed elements of the Ronald McDonald character, persona, style, costume and clown face when they adopted the clown as a trademark.

Charlton Comics obtained the license to publish four issues of a Ronald comic sold on newsstands in 1970–1971. Also, over the years several giveaway comics have been produced starring the character.

Ronald (with Grimace) appears in the 1984 Little Golden Book Ronald McDonald and the Tale of the Talking Plant, written by John Albano and drawn by John Costanza.

He appears for a few seconds in Mac and Me, during a birthday scene set at a McDonald's.

The Wacky Adventures of Ronald McDonald was a series of retail animated direct-to-video features produced by the ka-chew! division of Klasky-Csupo for the McDonald's fast-food restaurant chain. A total of six 40-minute tapes were produced, released at various times between 1998 and 2003.

Ronald McDonald is also the subject of a video game developed by Sega, and released in Japan in 1994.

In Thailand, Ronald McDonald greets people in the traditional Thai "wai" greeting gesture of both hands pressed together. The Thai version of the company mascot was created in 2002 by the local Thai franchise, McThai, as part of a "McThai in the Thai Spirit" campaign. The figure has also been exported to India and other countries where a similar gesture is used. In Japan, Ronald McDonald is called Donald McDonald due to a lack of a clear "r" sound in Japanese. A pair of McDonald's advertisements for the Tomato McGrand in Japan feature either a "sexy" male and female, both dressed in modern clothing with the Ronald McDonald color scheme. 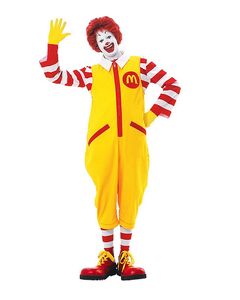 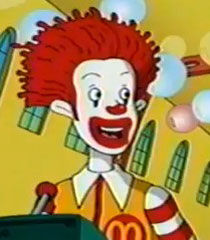 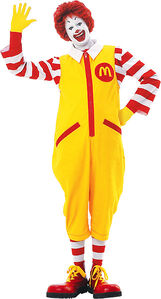