Ronin is the main antagonist in LEGO Ninjago: Shadow of Ronin, as well as a recurring ally of the Ninja in the fifth season of LEGO Ninjago: Masters of Spinjitzu. He is a selfish, yet skilled and intelligent mercenary, who was hired often by Master Chen for important tasks such as capturing Zane and releasing the banished master from the Cursed Realm.

Up until the destruction of the Obsidian Glaive, Ronin was a memory thief known to remove people's memories and replace them with lies about their past.

Ronin’s distinctive armor was, like most of his possessions, gained through dishonest means. It was forged by Eboshi, one of Ninjago’s greatest and most noble armorers, who Ronin tricked into helping him by implanting false memories with the Obsidian Glaive. After Eboshi created the armour for Ronin, he once more used the Obsidian Glaive, this time to wipe all of Eboshi’s memories so that he could never reveal Ronin’s identity.

Ronin is a self-centered greedy character, willing to cause chaos and destruction, just so that he could get paid. He shows little, if any, compassion to his victims, and cares little for his own henchmen, seeing them as nothing but tools to further his own plans. He often cracks jokes and mocked the Ninja throughout their encounters, which also showed him as being full of himself. But he was no fool, he was shown to always stay one step ahead of the Ninja and his foes.

In the series, Ronin has a more sympathetic backstory, as his motivation for in the game was actually to save his cursed soul. Eventually, his more sincere personality comes through in the episode, "Curse World: Part 1," when he arrives in his airship R.E.X. and promptly dumps every amount of money he ever made on the building Morro had lifted with his elemental wind power, giving Lloyd the chance to defeat Morro. From that point on he is the Ninjas' friend and ally. 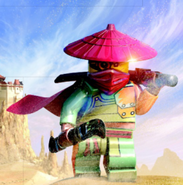