To help save the reef

Ronny is the secondary antagonist-turned-supporting protagonist of The Reef 2: High Tide. He is voiced by Jamie Kennedy.

He is a con-artist dwarf shark who helps Troy escape his cage. Troy threatens Ronny into following his orders until the evil shark kidnaps Cordelia and he sides with Pi.

Ronny is first seen with meeting mean tiger shark Troy trapped in a cage. Troy demands Ronny to let him out of the cage. Ronny informs Troy that he's a bargain maker and asks for an offer to which Troy growls; "I offer you your life." to which Ronny replies "I can live with that" and frees Troy. Ronny wishes Troy luck, but Troy refuses to let him leave, saying that he's "handy to have around." Troy threatens Ronny into following his orders by sabatoging Pi's training and tells him in exchange, he will let Ronny go. Ronny disguises himself with a piece of kelp as a wig and false dentures on is teeth. Witnessing Pi's disastrous training, Ronny gets an idea. He announces that the fish put on an "underwater extravaganza" saying every fish has a special skill, and by doing that, they will attract humans to protect them from the sharks. Everybody but Pi is enlightened by Ronny's plan.

Later, Troy orders Ronny to bring Cordelia outside the reef at sunset. When Ronny succeeds, Troy exposes Ronny's disguise to Cordelia, much to her horror. But Ronny, having grown to love the reef inhabitants tries explain but Troy kidnaps Cordelia. Deciding that Ronny had outlived his usefulness, Troy decides to let him go but threatens him "better leave before I change my mind." A remorseful Ronny sides with Pi and helps free Cordelia . Ronny blocks the hench-sharks' path telling them to stand up to Troy. Unfortunately, Troy had overheard and furious with Ronny's betrayal, Troy gobbles the little dwarf shark up in one gulp. When Troy is defeated, Ronny flies out of his mouth and back into the sea. The fully redeemed pygmy shark then uses his entertainment on the reef, to everyone's delight.

"Can I interest you in one of those snacks for a Rubik's cube? Great to past the time, and you seem to have plenty of that!"

"A guy after my own heart. Not only a fish hunter, but also a bargain hunter." 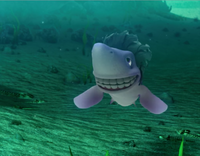 Pi argues with Ronny over his ridiculous talent plan.

Troy exposes Ronny as a shark to Cordelia

"Troy forced me to help him! I'm not like you! I can't stand up to him! I'll do anything to help you get Cordelia back!"

Ronny tries to convince the other sharks to stand up against Troy.

Troy eats Ronny for betraying him.

Ronny flies out of Troy's mouth

"There's my leading lady." Redeemed Ronny starts the party
Add a photo to this gallery
Retrieved from "https://hero.fandom.com/wiki/Ronny_(The_Reef)?oldid=1696515"
Community content is available under CC-BY-SA unless otherwise noted.