Making and eating pies
Drawing (as a kid in Atelier Meruru)

Prevent the worshop from being closed.

Teach alchemy to Totori
Help Lulua in her quest
(All succeded)

Alchemist
Rorolina Frixell also known as Rorona is the protagonist of the game Atelier Rorona The Alchemist of Arland and a supporting character in Atelier Totori: The Adventurer of Arland, Atelier Meruru: The Apprentice of Arland and Atelier Lulua: The Scion of Arland.

Atelier Rorona : The Alchemist of Arland

She is a 14 (17 in the western version) easy going girl who works as assistant for the alchemist Astrid. She was working as a way to repay Astrid for giving a cure to Rorona's parents who had a deadly illness.

The game begin as Rorona is visited by Sterkenburg Cranach, a knight of Arland also know as Sterk. He annonces Rorona that the workshop will be closed. To avoid that, the workshop will have to do many tasks for the kingdom (1 task every 3 months during 3 years, which means 12 tasks). While it was initialy a job for Astrid, she charges Rorona to do the tasks after renaming the workshop "Atelier Rorona". Rorona will also have to do request from people of Arland to gain in popularity.

The ending of the game will depends of :

In Atelier Rorona Plus, she will help Totori and Meruru who came from the future to return to their own time.

Atelier Totori : The Adventurer of Arland

The story happens 6 years after The Alchemist of Arland. Rorona is 22 years old and became a well known and respectd alchemist like her master.

She was travelling looking for her master who has dissapear with Hom. During her reasearch, she collasped in front of the Helmodl house in Alanya and was found by Totooria Helmold also known as Totori and bring inside the house. She then became Totori's alchemist master.

She is encounter the second time when Guid Helmold(Totori's father) fished her out of the water from Almeria's river. At this point she decided to help Totori to look for her mother. She creates a homunculus call Chim for to help her with alchemy and gathering. She will also let her use her worshop in Arland and join her party during exploration(if Totori recruits her).

Atelier Meruru : The Apprentice of Arland

Rorona will assist Meruru by drawing pictures which are in fact alchemy recipes. She will also be recrutable as a party member.

In the True Ending, Rorona is restored to her true age after drinking the True Potion of Youth.

Atelier Lulua : The Scion of Arland

Rorona has open a second worshop in Arklys which also serves her as home. She also adopted a daughter named Elmerulia Frixell also known as Lulua. Due to her work as an alchemist the two of them don't see each other often. Despide that, the two have a good relationship and Lulua admire her and wants to become an alchemist like her.

Upon their first meeting in the game at Arland worshop, Rorona will join Lulua party and help her in her quest.

In her ending, she leaves Arland with Sterk to make new discoveries. While she is reluctant to leave Lulua, she knows that Lulua is a strong girl and that her journey is important for Arland. 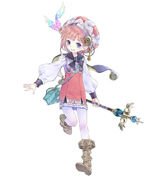