Checking for tails.
Cataloging events and writing in his journal.
Hanging out with Nite Owl II.
Eating canned beans.

Protect the public and expose Corruption.

Discover who killed the Comedian (succeeded).
Reveal the truth of Ozymandias' plan to the world (failed, then succeeded posthumously).

Rorschach (real name Walter Joseph Kovacs) is a fictional comic book character and the main anti-heroic protagonist of the acclaimed 1986 DC Comics miniseries Watchmen and the movie of the same name. Rorschach was created by writer Alan Moore and artist Dave Gibbons. Jackie Earle Haley portrayed him in the 2009 film adaptation directed by Zack Snyder.

Walter was born on March 21, 1940 to Sylvia Kovacs and "Charlie", whom left two months after he was born. Though not knowing his father, Walter would believe that he was a good man, was an aide to Harry S. Truman, or fought in the second world war. At a young age, Walter was abused by his mother and was exposed to the prostitute lifestyle she did to survive. When Walter interfered with her business, she would abuse him, and in one incident, recalled how she should have listened to everyone and had him aborted.

After fighting bullies who called him whore-son, Walter's home life was investigated, and he was sent to Charlton Home away from his mother's abuse. There, he proved to be stable and intelligent, excelling in literature and religious education. In addition, he also showed impressive feats in gymnastics and boxing, and discussions with others, but was shy and withdrawn, especially towards girls.

Walter suffered from the nightmare of his mother choking on raw dough, but returned to see her and a man joined together. In 1956, his mother was killed by her pimp, with Walter responding from the news, "good."

At an older age, Walter would live in a low-rent apartment and worked at a garment factory, but he found the job unpleasant due to having to handle female clothing. When asked by Kitty Genovese to make a dress in a new Doctor Manhattan fabric, she told Walter that the dress was ugly. Walter didn't believe so, and returned it and had it cut, but believed that it had no use, and put it away. When he learned that Genovese had been tortured and rape while neighbors watched, he lost faith in humanity (believing that all people were behind evasion and deception). Taking the fabric, he created a mask that looked similar to a Rorschach test paint and stated that it was his new face.

Kovacs took the name Rorschach from Herman Rorschach, and became a costumed adventurer who was a master acrobat, and crime fighter. Rorschach would meet Dan Dreiberg, who was the second Nite Owl, and a fellow vigilante and the two became partners. With his technical skills, Dan created a grappling hook gun for Rorschach, and the two would become successful heroes by defeating Underboss and Big Figure. When asked to join the Crimbusters by Captain Metropolis, he felt hesitant due to working only with Nite Owl. Rorschach would admire the Comedian for his forceful nature, as he watched the latter interrogate tied men.

As a crime fighter, Walter looked back at himself as "soft", as he allowed criminals to live, but this all changed when Gerald Anthony Grice kidnapped Blair Roche. Rorschach promised her parents to return her "unharmed", but realized that Grice had butchered her and fed her body to his dogs due to her family not being wealthy. Killing the first dog with a meat cleaver, he stated that Walter Kovacs had died, and killed the second dog. Rorschach waited till Grice returned home, and handcuff him, and burned down his home and watched. In the film, Rorschach fought Grice and handcuffed him, then killed him with a meat cleaver, stating that "men get arrested, dogs get put down."

After the incident, Rorschach quit his job, became more of a loner, and slowly went crazy as the 1970s were rolling in. During this time, the Keene Act was passed, outlawing costumed heroes and vigilantes, something Kovacs defied by killing rapist Harvey Furniss, and leaving his corpse in front of a police station, with a note pinned stating "never!". Rorschach lived a recluse life, living in a slum ran owned by Dolores Shairp, and not having an income to live off of, but continued to fight crime and defy the law. During the day, Rorschach would dress as a vagrant, holding a sign that said, "The End is Nigh."

After Edward Blake's murder, Rorschach went to his home to investigate, and learned that he was the Comedian. He theorized that someone was going around murdering former costumed heroes, and felt obliged to tell his former allies of the threat. He first went to Dan's by breaking into his home, and eating cold cans of beans, and gave the latter the Comedian's badge that had a bloodstain on it. Rorschach then went to Adrian Veidt, who gave his own personal opinion on the mask killer theory. He then broke into the Rockefeller Military Research Center to inform Doctor Manhattan and Silk Spectre. Osterman states that he has no care for humanity, as Laurie expresses her hatred for the Comedian, and Rorschach returned home and wrote in his journal.

Rorschach appeared at Blake's funeral (outside the cemetery), he noticed Edgar Jacobi there, who was once a villain named Moloch. Rorschach broke into his home and interrogated him on why he was there, but it was revealed that Blake went to his home and discussed many things with him (with the film stating him discussing about a real practical joke). Seeing that he doesn't know anything, he left to pay respects to Blake after inspecting Jacobi's bottle of illegal pills.

When Doctor Manhattan disappears, Rorschach returns to Dan and informed him that his mask killer theory was becoming more true, as the second masked hero was taken out. Returning to Jacobi, the plot is unraveled, and Rorschach continues to write more journals about the events. On October 21, Rorschach is at a diner and learns that there was attempted assassination on Veidt, proving his theory is true. Getting a message from Jacobi, Rorschach returns to Jacobi's apartment but sees that the former has been murdered, and he is being framed for it. Despite his best efforts to escape, he is captured, and his mask is ripped off his face, revealing himself to be Walter Kovacs.

Despite not saying anything in court, Rorschach is sent to Sing Sing Prison where he constantly threatened by inmates. One noticeable is Otis, whom he burns with cooking fat, and puts him into nursing. Dr. Malcolm Long then interviews Kovacs, who tells him of childhood and how he became Rorschach. The doctor is disturbed by the information, and slowly sees the darkness in all of humanity. Otis is put into critical condition, and since he could die, there will be a riot. Rorschach is confronted in his cell by Big Figure, and his henchman, Lawrence and Michael. After Lawrence and Michael's death, Rorschach kills Big Figure and escapes from Sing Sing with Nite Owl and Silk Spectre.

Returning to the apartment, Dr. Manhattan returns and takes Laurie so she can convince him to care for humanity. Rorschach and Nite Owl investigate after the former apologizes to Dan, and states that he is a "good friend". Going to Happy Harry's, they learn that Adrian's attempted murderer, Roy Chess was a by Pyramid Deliveries, and learn that Hollis Mason has been killed. The two then go to Veidt's office, they learn that Veidt owns both Pyramid Deliveries and Dimensional Developments. Seeing that he is behind all this, Rorschach mails his journal and joins Dan to confront Veidt in Antarctica.

Making it the resort despite Archie being shut down, the two are easily beaten by Veidt, and learn that he has used his genetically engineered Alien monster to destroy Manhattan. In the film, Dr. Manhattan teleporting to Manhattan cause the destruction, making him a threat. Dr. Manhattan and Silk Spectre come and try to aid Nite Owl and Rorschach to stop Veidt, but learn that humanity has called off the war since there is a greater force to handle. Except for Rorschach, everyone agrees to keep this a secret that the world can become greater. Disgusted and enraged, he attempts to leave and tell the world the truth, but Doctor Manhattan stops him. Knowing that Veidt's world will be protected over his life, he takes off his mask and orders Doctor Manhattan to disintegrate him. This is somewhat altered in the film, where Dan retaliates after Rorschach's death, telling Veidt that his legacy is that he "deformed and mutilated mankind".

Despite this, Rorschach left his journal in a mailbox to New Frontiersman, where Seymour's finding threatens Veidt's new utopia and possibly reveals the truth to the world. Rorschach's journal was published to the world but was ignored until President Robert Redford ordered an investigation in 1992. Despite the investigation, Redford did this so he could win reelection, and Seymour was killed and the journal was stolen. By this time, Reggie Long, son of Dr. Malcolm Long, collected Rorschach's mask and took the mantle as the second Rorschach, even having his mannerism down to the bone. Reggie would save the world from nuclear annihilation by finding Doctor Manhattan, and had Ozymandias imprisoned for life for his actions.

In his younger days, he was described as brilliant in multiple subjects, which is shown in his later years as well. Rorschach is also portrayed as a moral absolutist who sees the world as black and white to the point he refuses to keep quiet on Ozymandias and his plans despite the likelihood of a nuclear war breaking should it be revealed to the public. As could be expected due to his complete hatred of anything he finds evil or immoral, he is brutal and often lethal. He is unpredictable and will improvise any and all of his surroundings into his fighting style in order to get the upper hand.

Presumably due to his upbringing by a cruel and abusive mother, he seems to be uncomfortable around women especially when they are naked. He is often described as mentally ill by other characters and is paranoid overall. Rorschach even goes as far as to refer to his mask as his true "face" and claims the other is the "mask" and only removes the mask when it's absolutely necessary or out of his control. Due to all his experiences in life Rorschach is somewhat cynical and even borderline if not somewhat nihilistic in his views that society is falling down around itself, his near to complete lack of fear of physical harm and even death. 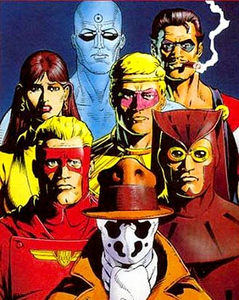 Rorschach with the Crimebusters. 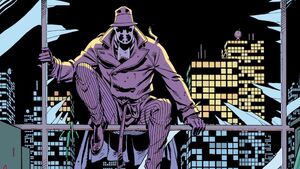 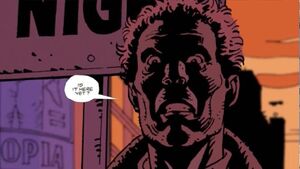 Kovacs appearing as a citizen, holding "The End is Nigh" sign. 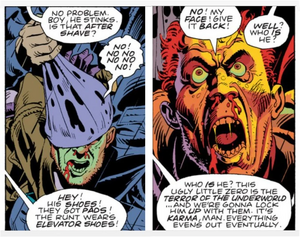 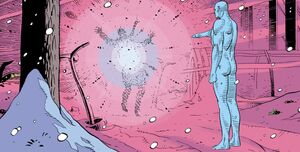 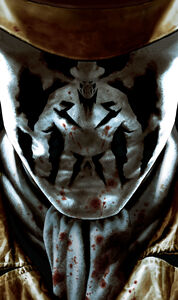 Rorschach in the Before Watchmen comics. 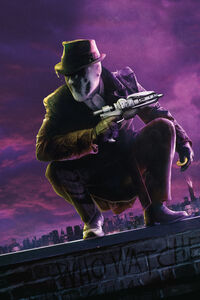 Jackie Early Haley as Rorschach in the film. 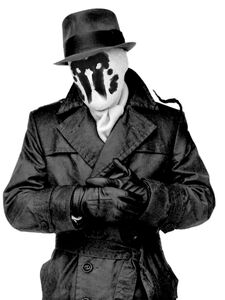 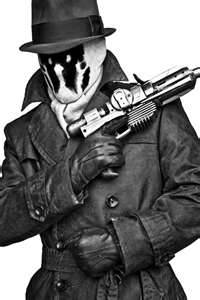 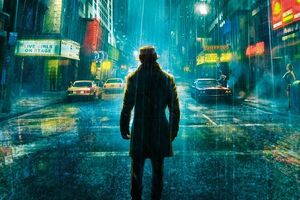 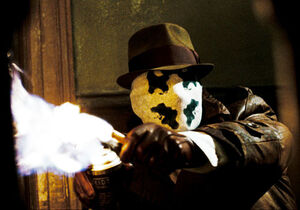 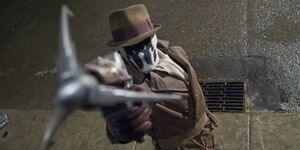 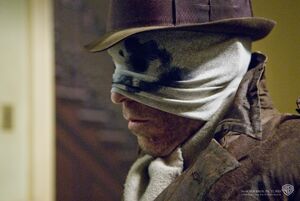 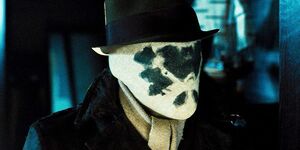 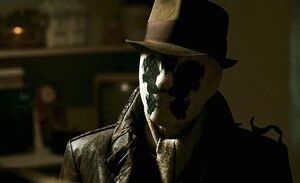 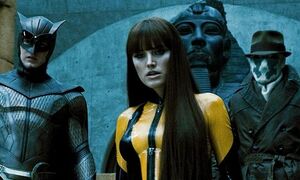 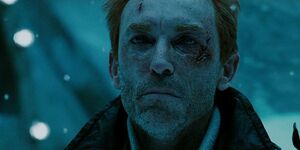 An Unmasked Kovacs being confronted by Doctor Manhattan.

Rorschach's death in the 2009 film adaptation.

The End is Nigh 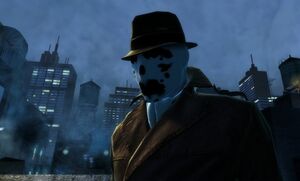 Rorschach in Watchmen: The End is Nigh. 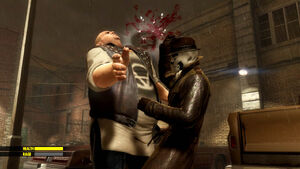 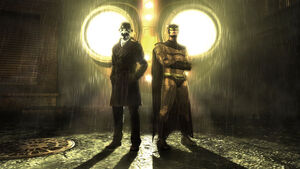 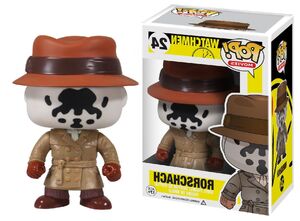