Doctor Who: The Eleventh Hour

No information
Rory Arthur Williams is the son of Brian Williams, the father of River Song, the father-in-law and companion of The Eleventh Doctor and the tritagonist of Series 5, 6 and the first half of Series 7 of the revival of Doctor Who.

He originally died after being shot by a Silurian named Resac and was erased from history after he was sucked into a crack in time, but Amy's memories of him brought him back as an Auton. He travelled with the Doctor until the episode The Angels Take Manhattan where he was zapped to another time period by a Weeping Angel. Not wanting to live without her husband, Amy allows the Weeping Angel to zap her away too, much to the sadness of the Doctor, who knew that he wouldn't be able to after the two and bring them back due to a paradox. A gravestone reveals that Rory died at the age of 82 while Amy died at 87.

He is played by Arthur Darvill who also plays Rip Hunter.

Travelling with Amy and the Doctor

Revived as an Auton 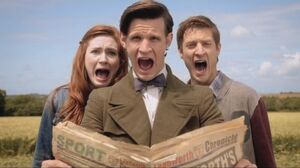 Amy, the Doctor, and Rory all scream. 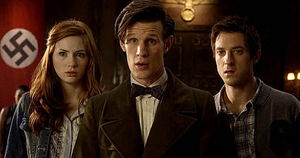 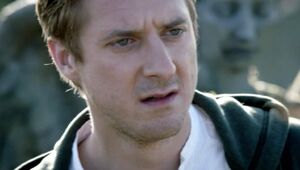 Rory moments before being zapped back in time (and his subsequent death).
Add a photo to this gallery

Retrieved from "https://hero.fandom.com/wiki/Rory_Williams?oldid=1839603"
Community content is available under CC-BY-SA unless otherwise noted.