No information
Rosa is one of Ruby's friends in Happiness. She is a light pink Ussuri brown bear with pink ears and tails who symbolizes passion. She wears a red heart-shaped apple jewel necklace and a big blue bow on her head.

Her first debuting in the end of Kira Deco, Rosa is born from the mirror ball after its completely repaired. She is first seen in her charm form after Labra is revived and later on awakened in the last minute. She also appear in Jewelpet Happiness as one of Ruby's friends in the Jewel Academy, managing the Jewel Café. She usually works as a waitress but has some rivalry issues with Labra and she is very brave who wants to help everyone. Her birthday is in June 18 and she is named after the Jewel Inca Rose. 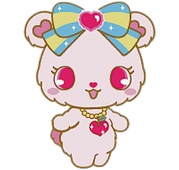