White 2
Whitley (in the manga)

Become the Champion of Unova and stop Team Plasma (all succeeded)

Kid
Rosa (Japanese: メイ Mei) is the female player character in Pokémon Black 2 and White 2. Her male counterpart is Nate.

Rosa is a tall and slim young girl. She has very long dark brown hair tied in two large sock buns above her ears, with two long locks hanging loose to her waist, and shorter locks on either side of her face, pale peach skin and dark blue eyes. She wears a pink and white visor on her head, as well as a salmon pink tank top tied with a bow around her neck like a bikini top under a white quarter length slim fit top with ice blue sleeves and a fully salmon pink semi-Poké Ball printed on the chest area. On her bottom half, she wears frilly flared mustard yellow shorts over black lycra leggings with salmon pink socks. Her hi-top shoes are ice blue and white with mustard yellow laces. She carries a large salmon pink and white handbag with a black strap over her shoulder. Rosa is always seen smiling but unlike Hilda who is always seen smiling as well but with her teeth clenched together, Rosa's smile involves her leaving her mouth wide open.

As the player, Rosa was born 13 years before the events of Pokémon Black and White, and 15 years before Black 2 and White 2. Her mother worked as a nurse at a Pokémon Center (at which one is never specified) and by the events of the Generation V sister games, she lives in Aspertia City with her mother and nearby her longtime friend Hugh.

Rosa is a young girl who lives in Aspertia City with her mother and her childhood friend Hugh. She is given her first Pokémon by Bianca and chooses the Pokémon weak to Hugh's. They then go their separate ways and she starts her journey across the Unova region.

If Nate is chosen in B2W2, the player character can encounter Rosa in front of the Battle Subway in Nimbasa City, where she will ask the player to tag battle with her to defeat the two Subway Masters.

Rosa will then appear as the player's partner in the Battle Subway when choosing to ride the Multi-Train. Two of the following Pokémon are picked from the corresponding list, depending on what Nate, the player, wants her to base her team on. If the player chooses "A balance between the two," Rosa's Pokémon are chosen from either list.

Rosa has a counterpart in the manga named Whitley. She and her mother were former members of Team Plasma, who went to hide in Aspertia City. 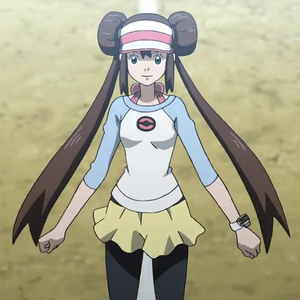 Rosa in the animated trailer 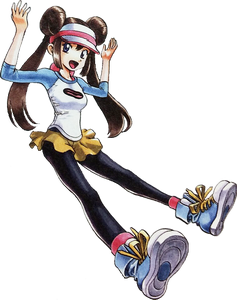 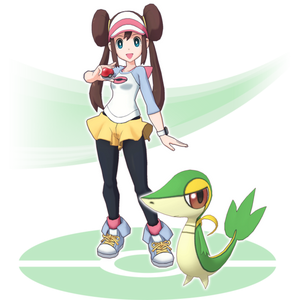 Rosa with her Snivy in Pokémon Masters 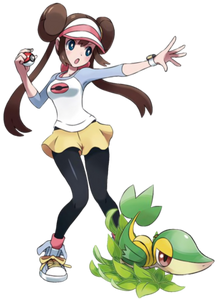