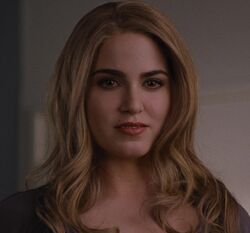 Rosalie Hale is a character from the Twilight series. She is the adopted daughter of Carlisle Cullen and Esme Cullen, adoptive sister of Jasper Hale as well as Edward Cullen and Alice Cullen , adoptive sister-in-law of Bella Cullen , adoptive aunt of Renesmee Cullen and the wife of Emmett Cullen. Her physical age is 18, and she was born in 1915 in Rochester, New York. Rosalie is described as exceptionally beautiful, even for a vampire; she is tall, statuesque, and has long, wavy blonde hair. While she was human, she was said to be a woman with elegance, class, and eyes the color of violets. In Eclipse, she describes her human self as vain, self-centered, and shallow, pleased with her physical beauty and forever desiring attention. A wealthy young man named Royce King II took an interest in her and soon the two became engaged, with Rosalie eager to have a fancy wedding, live in a big, expensive house, and have children of her own. While visiting her friend Vera, she one day noticed that she did not share the same loving relationship with Royce as her friend Vera did with her husband. Dismissing it, Rosalie later walked home and met an intoxicated Royce and his friends, leading to her being beaten, gang-raped, and left to die in the streets. Carlisle, coming across her, pitied her and changed her into a vampire with the secret hope that she would become Edward's mate, though the two of them are never more than brother and sister. After her transformation, she tortured and killed those who had attacked her, including Royce, but did not drink their blood, a fact that she is proud of. Apart from Carlisle and Edward, she has the most self-control and appreciation for human life, and has never tasted human blood. Rosalie is bitter that her life as a vampire prevents her from having children and experiencing the normal changes of life, and her desire to be human is so strong that she would give up her immortality and beauty for it.

When Rosalie first appears in Twilight she is hostile toward Bella and jealous of her humanity; she is also irritated that Edward could be attracted to Bella, a mere human, when he had never shown the slightest interest in Rosalie, who has always been desired by men. In New Moon, she mistakenly reports to Edward that Bella is dead after supposedly committing suicide. She is guilty and apologetic upon Bella and Edward's return from Italy, and later opposes Bella's choice to become a vampire, stating that she wishes there had been someone to say "no" for her. In Eclipse, Rosalie reveals her past to Bella with the hope that Bella will choose to stay human, and she later joins in the fight against Victoria's army of newborn vampires. In Breaking Dawn, Bella contacts Rosalie after finding out she is pregnant, knowing that Rosalie has always wanted children. She stays by Bella's side throughout the pregnancy, defending Bella's choice to keep the baby; this ultimately brings the two of them closer together, and by the end of the novel they have become best friends. Rosalie later helps care for her niece, Renesmee, while Bella is undergoing transformation into a vampire.

Retrieved from "https://hero.fandom.com/wiki/Rosalie_Hale?oldid=2210313"
Community content is available under CC-BY-SA unless otherwise noted.