Defeat all Zombies and take back Suburbia

Rose is one of the main protagonists of the Plants vs. Zombies franchise. She is a sorceress from the past who takes parts in fighting zombies.

She was voiced by Asia Mattu.

Rose was first appeared in Garden Warfare 2 as a playable character on the Plants' side. Her primary weapon is Magic Thistles.

Her L.E.A.F agent counterpart is Agent Rose, the quest giver to the players.

The first quest she gave to the players is heading to Colizeum to defeat Baron von Bats, who holds the wand she needs.

Next, she wanted to test her new wand on the BBQ, which the players had to defend it from incoming ice zombies.

When the wand created a rift of goats, she asked the players to close all of the rifts and defeat the Gargoatuar.

After all three quests are completed, she congratulated the players and let them open another portal, or meet Dave-bot 3000.1 under the garage.

Rose also returned to Battle for Neighborville as a playable of Support class.

Rose returned in Plants vs. Zombies Heroes as one of the playable character on the Plants' side. She leads Smarty and Solar classes.

In Rose's introduction comic strips, she can be seen protecting a Repeater and a Bonk Choy from a Basic Zombie, a Conehead Zombie, and a Buckethead Zombies by transforming them into goats. She later planned to sell them to a nearby Peashooter.

In Code Orange! Citron Invades!, Rose, alongside Grass Knuckles, and Citron (the main opposing enemy of the mission) attempted to replace the Zombie Flag with the Plant Flag on the moon, which angered Dr. Zomboss and he ordered Brain Freeze, Rustbolt, and Z-Mech to stop them. They had a battle until Citron attempted to use his spindash ability on Z-Mech, only to be defeated by him and knocked both Rose and Grass Knuckles out of the moon.

In Everything's Coming Up Goats!, after the zombies invaded Rose's castle, she appeared and attacked the zombies. She managed to goatify Most of the zombie heroes. However, before she could goatify Super Brainz, he accidentally used his mirror to deflect the ray, which transformed her into a goat instead, stopping her.

Rose alerted Crazy Dave that her castle has been taken over by Dr. Zomboss. After hearing this, he sent Red Stinger, Briar Rose, and Pepper M.D. to help her. The plants had a battle and managed to knock Dr. Zomboss out of Rose's castle.

Rose appeared in Garden Warfare comics as one of the supporting protagonists to assist Nate Timeley and Patrice Blazing fighting the zombies.

Druid Rose is a Super Rare variant of Rose in Garden Warfare 2. Her primary weapon, Toxic Volley, homes on targets.

Fire Rose is a Rare Rose variant whose Scorching Scepter is a charged primary weapon that homes and ignites her enemies.

Frost Rose is another Rare Rose variant that chills and freezes enemies with her charging Wand of Freezing.

Party Rose is a Legendary Rose variant who vanquishes her enemies with her rapid-fire homing Party Thistles that allows her to fill up her Party Time bar, where she gains a temporary speed and damage boost.

Nec'Rose is the final Super Rare Rose variant that can "Jinx" enemies with her charged Staff of Jinxing, where her enemies' endurance decreases when infected. 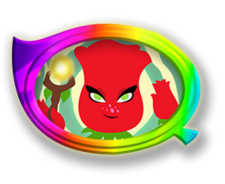