Rose of Sharon Cassidy is companion character in Fallout: New Vegas, and the owner of Cassidy Caravans in the Mojave Wasteland in 2281.

She was voiced by Rachel Roswell.

Cassidy Caravans was a water caravan running purified water from the Mojave to New California and back, but recently Cass was trapped at the Mojave Outpost while her caravan was in the Mojave on its own due to requiring caravan clearance and further on because of the outpost leader Jackson deeming the roads ahead too dangerous.

She would find out her caravan was ambushed and completely destroyed while in the NCR's bureaucratic hell. With Cassidy's Caravans having been completely wiped out, Cass is the only remaining loose end in a competitior's attempt at a monopoly.

Born in 2244, Cass is the daughter of John Cassidy and a tribal woman he met on his travels after parting ways with the Chosen One. Her father upped and left to once more wander the wastes while she was still young - leaving her only a name, a pendant, his shooting skills and propensity for hard-drinking and violence.

Worn down by years of hard luck and a recent rash of terrible misfortunes, Cass is a despondent merchant who is about to get out of the caravan business. She is smart, tough, and steady with a gun, but has not been savvy enough to survive the ruthless caravan wars that have flared up in Nevada since the NCR's expansion.

Though quick to join up with the player for some easy money, she is still interested in finding out if she has been suffering from bad luck or something more sinister. When first encountered by the Courier, Cass is drowning her sorrows at the Mojave Outpost bar.

NCR Ranger reports have reached her that her caravan has been attacked and "burned to ash," placing an even greater burden on her shoulders. However, threats along the road into New Vegas and problems with NCR paperwork have so far prevented her from leaving the outpost to investigate the attack.

Cass has an aggressive and eager, sometimes even impatient attitude, often telling the Courier to hurry up or get on with it, and does not take well to insults or her time wasted. She also enjoys violence quite a bit, much like her father.

She is also very outspoken on the NCR and Caesar's Legion, mostly pointing out the bureaucratic messes of the NCR and the Legion's use of women as breeding tools, but does concede that Legion supply lines are "safe as houses", unlike NCR supply lines. Lastly, Cass treats sex in a very casual manner.

Cass has inherited her father's heart condition and will show her disgust for chems if the Courier speaks to her whilst under their effects. On another note, her knowledge of the world is considerable, but not without holes. For example, she is not aware that golf is a sport, rather than a person, referring to Camp Golf as a monument to a man of that name and recounting soldier remarks that it used to be a minefield, with mine locations marked by numbers. 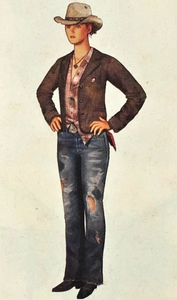 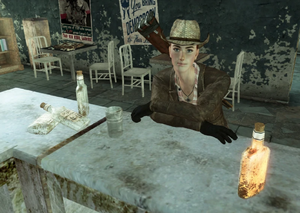 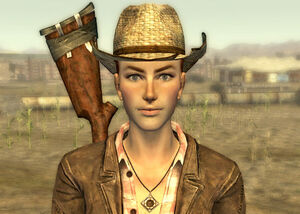 Cass with her hat. 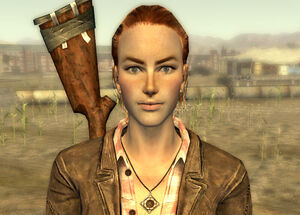 Cass without her hat. 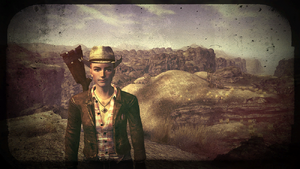 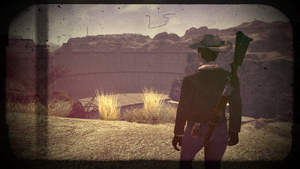 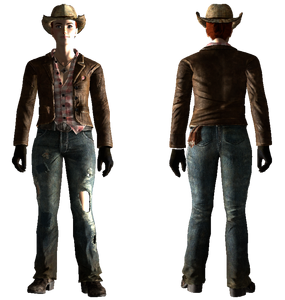