Rosie is a black widow spider from the animated film, "A Bug's Life". She is maternal toward the rhinoceros beetle, Dim, and the younger ants of the colony. She has apparently had twelve husbands. She will sometimes be involved in whatever Slim, Francis, and Heimlich are doing. She seems to share a friendship with Slim, to whom she is seen in proximity.

She is voiced by Bonnie Hunt who also voiced Sally Carrera and Dolly.

Rosie is usually a "beast tamer" in the circus. When Dim plays the "ferocious beast", Rosie hits his leg, which causes her to be guilty about herself being an anti-heroine. Rosie dislikes Tuck and Roll not listening to each other and quarreling.

Rosie is first seen encountering Dim in the circus. When Dim gets whipped painfully, Rosie bandages him up. She also reminds Tuck and Roll to arrive for showtime. During the Flaming Death act, Rosie and the rest of the circus members perform successfully and a few of the flies cheer for them for healing P.T. Flea.

At the Bug Bar, Rosie and the rest of the circus troupe are taught by Flik to be warriors. When the bar was completely rolled down, Rosie and the other circus performers were able to survive.

When Flik fibbed to the troupe about being warrior bugs, Rosie and the other performers are eventually circus artists and not warriors. She is notable because of rescuing Dot from a giant bird and bringing Flik, Dot, Tuck and Roll, and Francis to safety. After Flik told the colony a lie and was exiled from Ant Island, Rosie stopped P.T. Flea from taking Flik to the circus.

When the grasshoppers are about to take over Ant Island, Rosie and the other circus performers concur with Flik to use a fake bird to scare Hopper's henchmen. During the climax, Rosie is seen throwing Tuck and Roll towards Hopper to rescue Flik from being captured. Later, Rosie and the circus troupe leave Ant Island for next spring at the end of the film.

Rosie makes appearances in two levels in the game. She first appears in the level "City Square". She is one of the circus performers whom the player must find to complete this level. Her second appearance is in the level "The Tree", where she creates strands of web that Flik can use to swing over gaps on the tree. 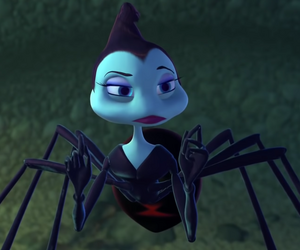 Rosie in the bloopers.