Rosie is a tank engine who idolizes Thomas.

Rosie is a cute, cheerful, little pink tank engine. She has a crush on Thomas, whom she idolises. After Thomas had an accident in the course of delivering his train to High Farm, she helped him and they both became best friends!

Rosie began idolising Thomas to the point of hero-worship and imitation. Though this is said to be the most sincere form of flattery, it only served to irritate Thomas whilst he was trying to deliver a special birthday post train to Alice at High Farm. He even started to try and avoid her, but after Thomas had an accident in the course of delivering this train, Rosie helped him and he came to respect her.

Rosie was later charged with acting as a back-engine to Emily with the funfair special. Wanting to take the train herself and, thinking she was doing Emily a favour, Rosie succeeded only in creating confusion and delay on a grand scale, but eventually set things right.

Rosie rescued Thomas when his fire went out after playing a game of "splish, splash, splosh". She later let Diesel take her train of flowers which was headed for market.

One day Rosie had a cracked wheel, so Thomas and Butch brought her a new one.

On Sodor Surprise Day, Thomas bumped some coal trucks to surprise Gordon, but ended up surprising her instead. She is later seen being cleaned up with Whiff at the washdown, and joins Gordon and Thomas at Callan Castle to see Harold decked out in bright lights to make Gordon laugh.

Rosie is a friendly, respectful, and helpful tank engine. She and Thomas like to have fun and also like to help each other when they are doing work. Rosie could be described as a feisty, energetic tomboy who is not afraid to work hard.

Rosie is an SR USA Class 0-6-0T. Fifteen of these engines were sold to the Southern Railway where they were used as dockyard shunters.

Rosie is painted lavender with light grey tank panels, gold boiler bands, and red detailing on her wheels and metalwork.

Starting from the twenty-first series onwards, Rosie is painted cherry red with dark raspberry tank panels, gold boiler bands and light grey lining. She has gold lining above her wheels and around her ladder. Rosie has the letters "NWR" written on her tank panels in light grey and the number "37" in light grey under her cab windows. She still retains her original red buffer beams and wheels with light grey wheel rims however. 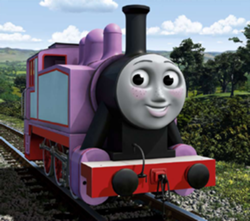 Rosie in the CGI series 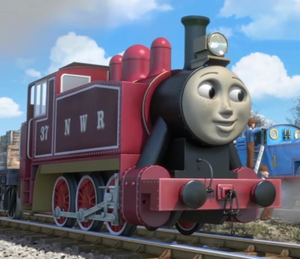 Rosie in her current red livery 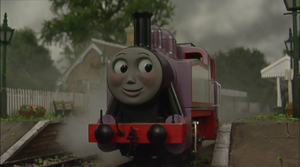 Add a photo to this gallery
Retrieved from "https://hero.fandom.com/wiki/Rosie_(Thomas_and_Friends)?oldid=1673974"
Community content is available under CC-BY-SA unless otherwise noted.