Start a Wiki
Rosita is a turquoise, Spanish-speaking monster who first appeared on Sesame Street in 1991 (Season 23). Hailing from Mexico, her full name is Rosita, la Monstrua de las Cuevas (Rosita, the Monster of the Caves). She is the second bilingual Muppet to ever appear on the show, speaking both English and Spanish. The first was Osvaldo the Grouch. She is good friends with Zoe, Elmo, Telly Monster and Abby Cadabby. Rosita originally had wings attached to her arms, reflecting her original concept design as a fruit bat. In season 35, she was rebuilt and no longer had wings. In an interview, Rosita claims that her family flew from their cave (near Snuffy's) during a storm, like a flying squirrel, and she lost her wings.(YouTube)

Rosita has often presented the Spanish Word of the Day, and features frequently playing her guitar.

Rosita has an extended family which includes an abuela and other relatives. Her dad, Ricardo, served in the military and is in a wheelchair due to injuries related to his service. He made his debut with Rosita's mom, Rosa, in the 2007 resource video, Talk, Listen, Connect: Changes.

Rosita and Prairie Dawn from The Adventures Of Elmo In Grouchland 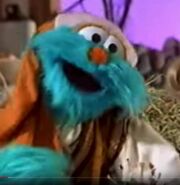 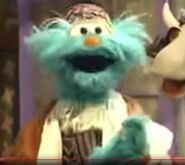 Zoe and Rosita from Bert and Ernie's Word Play

Rostia and Elmo talking about being a friends 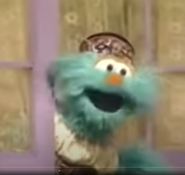 "Somebody's gotta catch that wolf and save our village!" 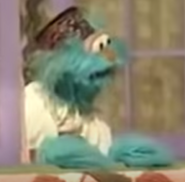 "Look everyone!" "Peter's has got the wolf!"
Add a photo to this gallery
==
Retrieved from "https://hero.fandom.com/wiki/Rosita_(Sesame_Street)?oldid=2000483"
Community content is available under CC-BY-SA unless otherwise noted.