The Diary of a Wimpy Kid Series

Hanging out with Greg
Playing with Dinoblazers
Video gaming
Journaling

Greg Heffley (On and Off)

Colin Lee (Only in the First Book)
Abigal Brown (Girlfriend; Broke up in Hard Luck)

Bullies
Greg Heffley (On and Off)

He is also the main protagonist of his own book series, Diary of an Awesome Friendly Kid.

In the films, he was portrayed by Robert Capron on the first three film, Owen Asztalos in The Long Haul, and Hunter Dillion in the 2021 remake.

Rowley is best known for being a good best friend to Greg. Rowley is quite immature and seems a bit naive, but he has a charming, cheerful and innocence made him more popular with other students (particularly the girls) than Greg had. Likewise, he has a pure soul and only wishes the best for everyone.

In the movie series, Rowley is an overweight boy with long bowl shaped hair that is orange and is wider than Greg's, but his hair is golden brown in Rodrick Rules and Dog Days. In the book series, he has 7 strands of hair that is flat on his head and is wider than Greg's. He has two large teeth and his mouth never appears to be closed, except for when he's in bed in the online book, page 58 of Cabin Fever, page 166 of Third Wheel, and page 29 of Hard Luck. In Hard Luck, since he started dating Abigail Brown, he combed his hair differently, and had 9 strands rather than 7, after the break-up he goes back to his original look. 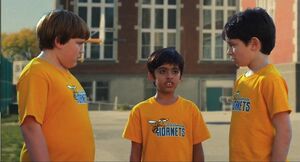