She is portrayed by actress Sophie Cookson.

Roxanne "Roxy" Morton was born on September 22, 1992 to a reasonably wealthy family in England. Very little is known about her childhood.

Roxy was recruited by the Kingsman agent Percival to compete for the open position of Lancelot. She was one of only two girls chosen. She also befriends Eggsy Unwin during her recruitment. When the cadets were instructed to pick a dog, she picked a poodle. Eggsy sniggered at this, but she retorted back by telling him poodles were the oldest working breed of gundog. Roxy rides a high-altitude balloon into the stratosphere to disrupt Valentine's impending broadcast by destroying one of his satellites, while Eggsy and Merlin infiltrate Valentine’s mountain bunker complex in northern Siberia. Roxy downs the satellite, but Valentine gets a business contact to replace it, then activates the signal, causing mayhem worldwide. It is evident that Roxy has a profound fear of heights, both during training and the mission, due to her seemingly panicked state and inability to control her descent.

Since the events of the last film, Roxy has become a full agent, and has taken up residence at the Kingsman base.

While Eggsy was having dinner with Princess Tilde and her parents, he attempted to impress them, and so he had Roxy feed him information on sophisticated topics brought up by Tilde's father (via earpiece and glasses).

After Charlie's Cybernetic Arm hacked the Kingsman network, the Golden Circle launched ICBMs on all Kingsman residences and locations in an effort to exterminate them, including the Kingsman mansion headquarters which she was residing in. The mansion was utterly destroyed and Roxy is presumed to have been killed.

Shortly after Roxy's death, Eggsy and Merlin make a toast to honour Roxy, along with JB, Arthur and the other 8 fallen Kingsman agents. Towards the end of The Golden Circle, Eggsy kills Charlie, avenging Roxy. 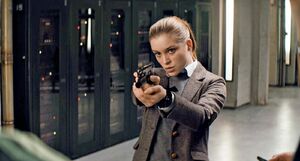 Roxy in The Secret Service. 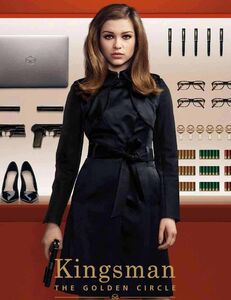 Sophie Cookson as Roxy Morton in Kingsman - The Golden Circle