Leader of the Lycian Alliance

Roy is the main protagonist of Fire Emblem: The Binding Blade, and the son of Eliwood.

Roy's mother could be either Lyndis, Fiora, Ninian, or a nameless woman, depending on who Eliwood gained supports with in Fire Emblem, or if he had any supports at all. Roy is also given access to the Sword of Seals, one of the most powerful weapons in The Binding Blade. He is stated in the Hasha No Tsurugi manga to be 15 years old.

He makes a brief cameo in the ending of Fire Emblem: The Blazing Blade

After being absent in Brawl, Roy returns in Super Smash Bros. 2014 as a playable DLC character. Marth has an alternate costume that resembles Roy's outfit from Melee. Another Roy also appears as an unrelated new character. Music associated with the character, "Winning Road - Roy's Hope", is also present in the game.

Roy returns as a playable character with an english voice. He previously spoke japanese in the other smash games. 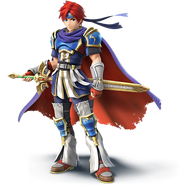 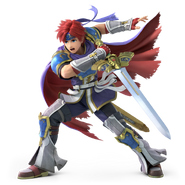 Roy's Artwork from Super Smash Bros. Ultimate.
Add a photo to this gallery

Retrieved from "https://hero.fandom.com/wiki/Roy_(Fire_Emblem)?oldid=1955051"
Community content is available under CC-BY-SA unless otherwise noted.