Rubble is the English Bulldog and one of the five tritagonists from the Nick, Jr./TvoKids show PAW Patrol. He is the constructor of the patrol in which he uses his tractor shovel for certain digging missions. It is shown in "Pups Get a Rubble" that he is the newest member (until the arrival of Everest), but he is the newest to live in the Lookout, while in the movie, he is living in Thunder Bay apartment with his owners, like other pups.

Rubble is voiced by Devan Cohen in the North American and Canadian versions of TV series and by Keegan Hedley in the movie. In the British version of TV series, he was voiced by Luca Townsend until Season 3, because he was replaced by Fin Harvey since Season 3.

Rubble is an English Bulldog puppy. He has brown fur with his belly, paws and most of his face being white, and bright brown eyes. His tail is so small that it can hardly be seen. He wears a yellow vest and hard hat, with the latter having a silver PAW Patrol logo on it. On his neck, he has a yellow pup tag with a wrench badge, while in the movie his tag is icon of Miles "Tails" Prower.

Despite appearing to be gruff, Rubble is actually very emotional and has a fondness for smaller animals, kittens in particular, and sometimes gives them cute nicknames like "itty-bitty.witty-kitty". He also has a fondness for food, as shown in the episode "Pups Save the Treats".

Like all members of the PAW Patrol, Rubble has a pup tag that he can use to make calls to Ryder, the Lookout, and his fellow members. It can also be used to make video calls to other members. As a Mighty Pup, Rubble can be able to lift objects as heavy as a building with his Super Strength.

Rubble's normal pup pack can transform into a shovel and contains a jackhammer, while his Mission PAW pup pack contains a claw used to move heavy objects.

Rubble's vehicle, number 06, is a bulldozer with a drill arm, a digger scoop, a crane, a claw arm, and a jackhammer.

In the episode "Air Pups", Rubble received a hoverboard for air-based rescues.

In "Mission PAW: Quest for the Crown", Rubble received a mini-miner with a drill that can break through walls.

Rubble is very skilled at skate and snowboarding, as Marshall does. He also excels at digging. 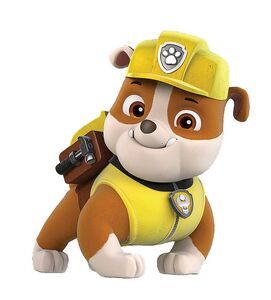 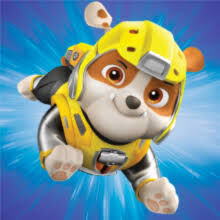 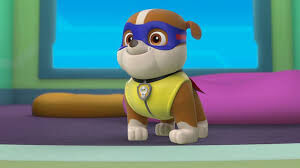 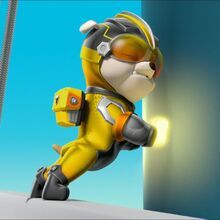 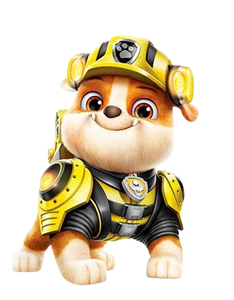 Paw Patrol: The Movie
Add a photo to this gallery

Prior to his entry in the PAW Patrol, his pup-tag appeared on the Lookout's briefing screen.

Retrieved from "https://hero.fandom.com/wiki/Rubble_(PAW_Patrol)?oldid=2326072"
Community content is available under CC-BY-SA unless otherwise noted.