Magical
Ruby Moon is a fictional character in Clamp's anime and manga series Cardcaptor Sakura. She is a fairy that performs ruby-based attacks and acts as counterpart of sorts to Yue.

In the Japanese anime, she is voiced by Ryōka Yuzuki who also voiced Ino Yamanaka and Satsuki Kiryūin.

Ruby Moon has no biological sex; but prefers feminine pronouns.

Unlike the Yue/Yukito relationship, both Ruby/Nakuru forms are fully aware and display no dissociative personality. As the alias, Nakuru Akizuki, she acts as a general annoyance, deliberately interfering every time Toya tries to talk to Yukito about the latter's dwindling energy. She claims she wants to consume Toya's energy herself, though it is never stated that she actually has a need for it nor why she couldn't simply steal it. When Toya is finally able to speak with Yue and give him all of his magical energy to sustain Yue's life, Akizuki gives up her pursuit. In the final battle, Ruby Moon battles Yue and initially appears to be winning. However, Yue is able to get past her due to Yue's greater determination and desire to protect Sakura. 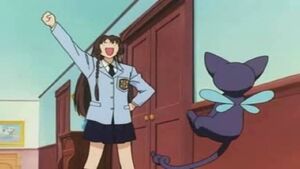 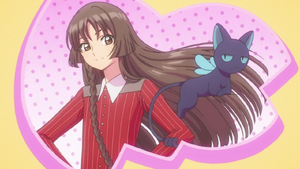 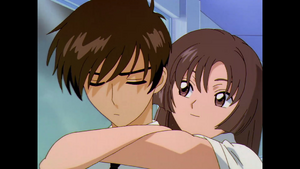 Retrieved from "https://hero.fandom.com/wiki/Ruby_Moon?oldid=2120265"
Community content is available under CC-BY-SA unless otherwise noted.