Ignoring orders and collaborating with the allies to stop supernatural threats

Experiment with the Stone Mask and Pillar Men in order to further the power of the NSDAP. (initially)

Stop the Pillar Men and save humanity (later on)

Although a high-ranking Nazi officer with a proud nature, after assuming mutual enemies with the allied team, Stroheim proves to be an effective ally.

He is voiced by Atsushi Imarouka in Japanese and Dan Woren in English.

Stroheim is a tall, well-built man of masculine facial features (comparable to those of the contemporary Dolph Lundgren).

Blue-eyed; at his introduction his blonde hair involves a short flat-top and a length at his neck; soon developing into tall, splaying cut. Later, he acquires complex metallic cybernetic prosthetics, including the section of his face surrounding his right eye; which is additionally covered by a sort of monocle.

He wears a range of official Nazi military attire. His cyborg prosthetics include his entire abdomen, which houses a powerful machine gun.

When Stroheim is first introduced, he is a callous, cruel, demanding Nazi Major who has the foolish idea to experiment with the Stone Mask in order to further the power of the Waffen-SS.

However, upon being threatened with Santana's rampage, he demonstrates bravery and does not hesitate when trapped in asking Joseph to cut off his leg; or blow himself up with a grenade to kill the invading Santana. This is seen once again when Stroheim gives him a helping hand in defeating Kars and helping Joseph drive him into the volcano with an airplane.

Stroheim is an enthusiastic nationalist. He is particularly proud of his cyborg body; praising "German science".

Stroheim respects bravery, no matter what ethnicity the individual may belong to, this is seen when he spares one Mexican child for being willing to sacrifice himself for his whole village.

Stroheim is said to have fought and died (bravely) on the Stalingrad Eastern front during WW2.

As a Major in the Nazi Party, Stroheim is capable of leading his own battalion, as well as any members of the party of lower rank. To this end, Stroheim enforces his rank with a strong sense of pride and most of time, his word is law. As a capable leader, Stroheim often initiates attacks upon command, though the logic behind them usually varies depending on the level of abnormality of the enemy. When cornered, Stroheim's eminent pride in his country will cause him to unquestionably sacrifice himself to take out his target. In terms of combat expertise, it is presumed he is capable of performing the most basic of military skills with ease, including assembling and disassembling military weapons, and making efficient use of said weapons. Stroheim also flaunts a very able-bodied physique and has demonstrated a very high jumping ability.

After being resurrected as a Cyborg, Stroheim's physical capabilities increased and with it his rank to Colonel status. As a Cyborg, his strength increases significantly, having been designed with the ability to crush an object with his hand at a pressure of 1,950 kg/cm2 (roughly double Santana's.) In this form, Stroheim had also gained partial immortality, being able to survive most attacks, as his mechanical limbs being damaged lessens the effect on his lifeforce. With these limbs, he is capable of bending his body unnaturally, and deflect enemy attacks due to being made of metal. Situated on one side of Stroheim's face is a magnifying device that allows Stroheim to zoom in on objects up to a point where he can study their internal structure. 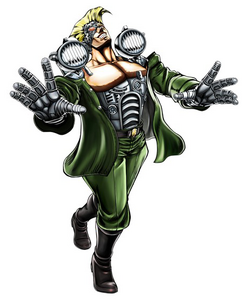