Rudy the Red-Nosed Reject (by Arrow)
Mr. Red (by Rusty)
Dad (by Robbie)

One of Santa's reindeer

Light from his nose

Pondering in self pity (former)

Prove he is not a misfit (succeeded)

Everyone who bullied him as a child (former)

Rudolph (most commonly known as rudolph the rd nosed reindeer) is the main titular protagonist of the same name.

In the original Rudolph the Red-Nosed Reindeer special, just as the song suggests, Rudolph was born with an unusually shiny red nose. Donner was ashamed of his son's unusual trait, so he placed a fake nose on Rudolph, which later fell off.

Rudolph leaves home because he feels ashamed of this. He later befriends Hermey, an elf outcast who wanted to be a dentist, and the miner Yukon Cornelius. They arrived at the Island of Misfit Toys, a place where all of the unwanted toys go.

After spending the night, Rudolph travels back to his home, and finds out that his family along with his love interest Clarice left to go look for him. He searches for them, saving them from the Abominable Snowmonster of the North. Once they arrive at the North Pole, Rudolph learns that Christmas will have to be canceled because of the weather conditions. However, Santa Claus asks Rudolph to use his nose to light the way and lead his team. Thus, Christmas is saved and Rudolph is praised as a hero instead of a misfit.

Rudolph also makes a brief cameo in Santa Claus is Comin' to Town, immediately following the introduction of the original eight reindeer. As a continuity nod, S. D. Kluger points out to his audience that Rudolph does not have a role in the story he's telling, since his backstory is another story altogether.

Oddly enough, Rudolph is not accompanied by any of his co-stars from the original special in Shiny New Year nor Christmas in July. Also, although he was a fully-grown reindeer by the end of the original special, in these sequels, he appears to have de-aged back to his younger form.

Rudolph returned in two sequels, Rudolph's Shiny New Year and Rudolph and Frosty's Christmas in July. The latter provides a detailed backstory for Rudolph's nose, explaining that the Lady Borealis made it shine as a defense against the evil Winterbolt, and that its power lasts only as long as Rudolph uses his gift for good.

Rudolph later starred in another sequel to the Rankin/Bass Rudolph, titled Rudolph the Red-Nosed Reindeer and the Island of Misfit Toys.

Rudolph, like in all such specials, is the main protagonist of the 1998 Goodtimes Entertainment film Rudolph the Red-Nosed Reindeer: the Movie. This time, Blitzen is his father and a doe named Mitzi is his mother. He has a new love interest, named Zoey and is love rivals with his cousin Arrow. In this version, Rudolph's father is actually kinder to his son and supports him even though he is worried about the others' reactions. Santa also supports Rudolph. His friends in this film are Slyly and Leonard.

Despite not being mentioned by name Rudolph is revealed to be the father of Robbie in the first Robbie the Reindeer film Hooves of Fire and a painting of him is in the cabin where the sleigh team live. In the third film Close Encounters of the Herd Kind, Rudolph gains Donner (who is portrayed as female in the films) as a daughter-in-law after she marries Robbie.

Rudolph is heard but is unseen in the 2006 film Holidaze: The Christmas That Almost Didn't Happen which centres around his younger brother Rusty. A billboard of Rudolph and the sleigh team is seen in the city Rusty visits. Later in the film, Rusty goes to a Walmart store and comes across a cardboard cutout and toys of Rudolph (who is depicted as having a black nose, hinting that his nose is only red when it lights up). Also unlike the Rankin/Bass and Goodtimes films, Rudolph's father is a normal reindeer instead of one of Santa's. Also, due to copyright reasons, Rudolph's full name is not said, instead he is referred to as Rudy or Mr. Red.

Rudolph along with Donner and Blitzen appear in the 2014 Doctor Who Christmas special Last Christmas. 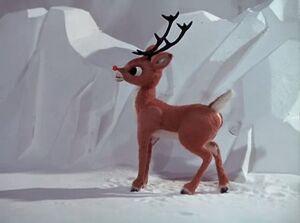 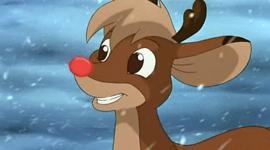 Rudolph in Rudolph the Red-Nosed Reindeer: The Movie. 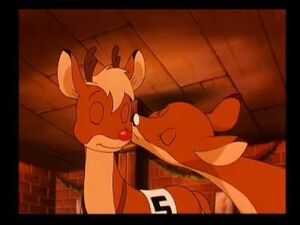 Rudolph in Rudolph the Red-Nosed Reindeer and the Island of Misfit Toys.

Rudolph's portrait that appears in Robbie the Reindeer: Hooves of Fire

Rudolph in the 2014 Doctor Who Christmas special Last Christmas 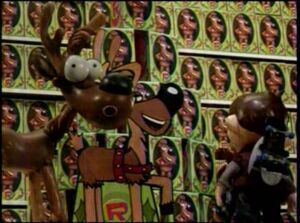 Retrieved from "https://hero.fandom.com/wiki/Rudolph_the_Red-Nosed_Reindeer?oldid=1690416"
Community content is available under CC-BY-SA unless otherwise noted.