Snap and Penny (his best friends)
Blocky
,others

Rudy lives with his strict, but loving parents, Joe and Millie in Plainsville. He also has a aunt named Tillie McNilly and a little cousin named Sophie McNilly. Except for the first time he entered ChalkZone, he always enters it with his best friend, Penny, and they go on adventures with Snap. Sometimes, he gets bullied by Reggie Bullnerd and also gets into trouble with his grumpy teacher, Mr. Wilter, who strongly dislikes cartoons, especially Rudy's passion of art. He is ten years old throughout the series.

He was voiced by veteran voice actress E.G. Daily, who also voiced Tommy Pickles from Rugrats, Buttercup from The Powerpuff Girls, Hinoka from Fire Emblem Fates, and Louie from Quack Pack.

Rudy is creative, level-headed and kind. He is also a pacifist. He is shy and a dreamer. He has been shown as quite brave 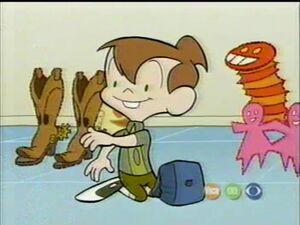