Sister of the Ruler of Thorston

Ruffnut Eugene Thorston is a major protagonist in DreamWorks' How to Train Your Dragon series.

She is a young inhabitant of Berk and the fraternal twin of Tuffnut. She is often arguing with her brother, often to the point of physical violence, though never seriously enough to separate them for too long. She is 14 years old in How To Train Your Dragon, 15–18 years old throughout the entire series, and 19 in the sequel.

In film series, she is voiced by Kristen Wiig, who also played Erin Gilbert.

In TV series, she was voiced by Julie Marcus for Riders of Berk and later currently Andrée Vermeulen for rest of show.

Joining the same Dragon Training class as Hiccup, at first Ruff delights in taunting Hiccup over his poor performance although she doesn't have much success either due to the fact that she couldn't get along with her brother in battle. Later, however, when Hiccup displays an amazing talent for subduing the Dragons, she becomes his avid fan (often pushing and shoving Tuff to be the first to talk to him). Ruff seems to develop a crush on him and flirts with him (before Astrid pulls her away). Ruff decides to help Hiccup fight the Red Death and bond with the Zippleback that had been trapped in the training arena before.

To confront the Red Death, the twins mount a Hideous Zippleback, which fits their fractious relationship, the two naming the dragon Barf and Belch. Each head seems to agree with one of the twins in particular - Ruff taking Barf and Tuff Belch, and they ride it to great effect in the final battle and afterwards. Notably, they were the only ones not forced from their dragon in the final battle.

Ruff has grown and, like the other Viking teens, plays Dragon Racing. She seems to be slightly a bit more mature than her brother, but in some ways she has shown that her childish acts still remain with her. 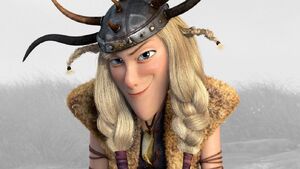 Ruffnut as a young adult in the second movie 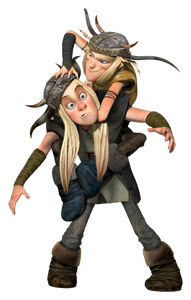