Dancing
Eating cheese and other snacks

Assist Kim and Ron on missions.

Rufus is a naked mole-rat, the pet friend, and soul brother of Ron Stoppable, and the tritagonist of Kim Possible, as well as the tritagonist in Kim Possible Season 2's "Exchange". Rufus lives almost full-time in Ron's pocket, and accompanies him everywhere. He is exceptionally intelligent for an animal, but average by human standards, and is capable of limited speech.

He was voiced by Nancy Cartwright who also voiced Pistol Pete, Chuckie Finster, Todd Daring, and Bart Simpson which she will play him for 2019 live action film of Kim Possible.

Rufus is generally portrayed as pink, small and light, and very agile, which proves useful time and again.

He shares several things in common with his owner: his love of Bueno Nachofood (and subsequently, the Naco), his ability to eat with practically no regard for the food he is eating, sharing Ron's disgust for others, and an overall laid-back, casual attitude. However, unlike Ron, he has been known to abandon this attitude at crucial times, often using quicker thinking than his owner.

Rufus was bought by Ron at Smarty Mart, during Ron's quest for a pet which would not aggravate his father's allergies to animal fur. When he was first bought, Rufus's appearance more resembled that of an actual naked mole rat, being wrinkled, eyes barely open and considerably smaller.

Rufus tends to display frustration with Ron when he uses him in an embarrassing way, or fails to give Rufus (or others) due credit. However, he has generally stuck by Ron in virtually every situation, and though he does not have the same fear, has the same overall dislike for monkeys. Rufus also possesses mystical monkey powers as he was in Ron's pocket when he got his, but never using them beyond displaying a greater degree of mastery of Yamanouchi ninja training than Ron, as well as once controlling the Lotus Blade. In the episode "Oh No! Yono!", he was the first one to be turned into a statue by Yono the Destroyer, but was subsequently turned back. 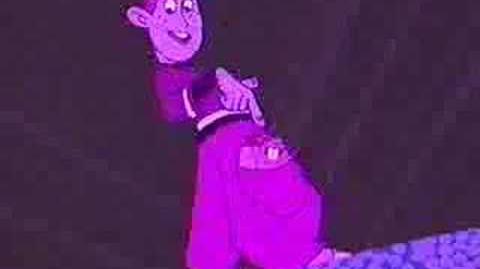