Russell one of the two deuteragonists (apart from Dug) of Disney/Pixar's Up. He is a 9-year-old child and Junior Wilderness Explorer who needs to earn his "Assist the Elderly" badge. He joins Carl on his adventure to Paradise Falls.

He is voiced by Jordan Nagai in the movie and by Peter Sohn in George and AJ.

Russell is first seen at Carl Fredricksen's door reading his book about the Paradise Falls Scouts. Carl slammed the door and hurt his foot by accident after getting annoyed by his reading. Later on, Russell happens to be on the front porch of Carl's house when he turns it into a makeshift airship using thousands of balloons. Before Carl can return him home, however, they are caught up in a storm that takes them all the way to South America, which is ironically exactly where Carl was going since that's where Paradise Falls is located.

Shortly after landing in Paradise Falls, Carl and Russell meet a rare bird named Kevin. Russell also befriends Kevin by offering him pieces of chocolate. When on a trail, Carl and Russell found a golden retriever named Dug. Soon, they are met by an elderly Charles Muntz, Carl's childhood idol. Many of Muntz's dogs started chasing after Kevin and one of them bites her leg. Russell puts a bandage on Kevin's wound.

That night, Charles Muntz and his dogs start to do an ambush on Carl's house and capture Kevin. Russell offered his badge collection to Carl, meaning that Kevin has been captured by Charles Muntz. Russell was able to reach the Spirit of Adventure using Carl's leaf blower in order to free Kevin. In an attempt to free Kevin, Russell is tied up on a chair. Russell was able to free himself when tied up on a chair. Russell, along with Carl, Kevin, and Dug, tricked Charles Muntz by tying him up with one of the balloons, which then pops, causing him to fall to his death.

Later on, Russell is awarded the "Assist the Elderly" badge by helping Carl when Strauch was announcing the winners. Russell, along with Carl and Dug, go to Fresno's for ice cream.

During the credits, Carl and Russell have new adventures and are staying in the Shady Oaks Retirement Village with all of Charles Muntz's dogs.

Well I gotta help you something 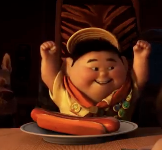