He is voiced by Kyle Harrison Breitkopf in the US and Canada who also voiced Gekko in PJ Masks seasons 1-3. In the UK version he was voiced by Theo Crabb-LaHei.

Rusty has fair skin, bright green eyes, and dark blue hair. He wears blue jeans, a gray tool belt, a pair of goggles, sneakers, gloves, and an orange T-shirt with a lightning bolt badge on the center.

Rusty has his own Go-Kart, which he often upgrades: blue, gray, and orange. He uses this vehicle to get around and to transport his Bit Machines to and from place to place. 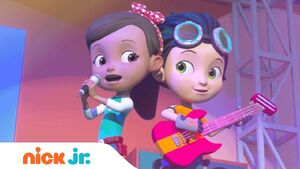 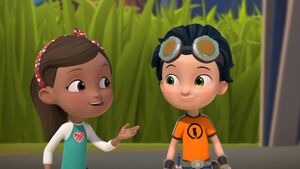 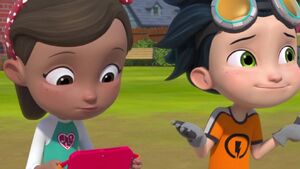 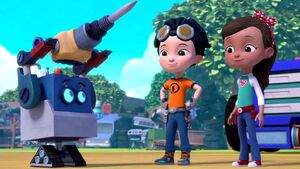 Retrieved from "https://hero.fandom.com/wiki/Rusty_Rivets?oldid=2267162"
Community content is available under CC-BY-SA unless otherwise noted.