Martial Artists
Ryōzanpaku is the team of elite fighters who specialize in different styles of martial arts. It is the major aspect in the manga/anime series History's Strongest Disciple. The team is famous for its powerful members and is challenged by other dojos and single fighters so often that they charges its challengers and have a waiting list. Despite this, the dojo lacks money; during the YOMI Arc, it goes into bankrupt.

Although they are all immeasurably powerful, the masters of Ryōzanpaku are also very eccentric and quite prone to immature behavior. They have trouble interacting with normal people, mainly because they unconsciously release massive amounts of ki, which sometimes makes the people they encounter feel nauseated. They are lazy procrastinators – only Ma and Kōetsuji are shown to bring in any steady income, Shio gets larger sums of money for bodyguard mission for the Police, while Apachai and Shigure have childish tendencies. 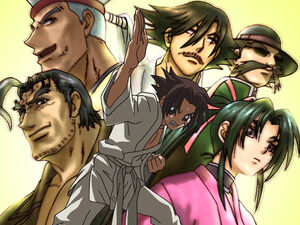 Retrieved from "https://hero.fandom.com/wiki/Ryōzanpaku?oldid=1884933"
Community content is available under CC-BY-SA unless otherwise noted.