To learn to roar (succeeded)

Reunite with his father and defeat Kazar (succeeded)

Kid Hero
Ryan is the tritagonist of Disney's CGI animated film The Wild.​​​​ He is a male African lion cub and Samson's 11-year-old son.

Ryan is a preteen lion cub who wants to be able to roar like Samson. All he can apparently do is make a feeble meowing noise. He likes to hear Samson's stories about the wild, although none of them were true. One day, Ryan inadvertently provokes a gazelle stampede, which promptly invokes Samson's anger over losing the turtle curling championship. After Samson scolds Ryan and lectures him about not being able to roar, Ryan sneaks into a green transport box and winds up getting shipped to Africa. He is later kidnapped by Blag, one of Kazar's wildebeest henchmen.

After reuniting with his father and learning the truth about where Samson came from, Ryan eventually finds his inner roar (which he uses to defeat Kazar) and heads back home with his father, the zoo animals, and Kazar's former henchmen. 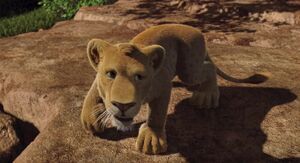 Retrieved from "https://hero.fandom.com/wiki/Ryan_(The_Wild)?oldid=2140347"
Community content is available under CC-BY-SA unless otherwise noted.