When Ryan was young, he was involved in a car accident along with his father, Captain Mitchell, and his sister, Dana. All three were suspended over a cliff. Captain Mitchell had a secure grasp of Dana, but Ryan was hanging on by his father's shoe. The spirit of Diabolico appeared and offered a deal: Diabolico would save the child, but in payment he would raise the child himself, and Captain Mitchell would not see him again until his 20th birthday. Captain Mitchell at first refused, but relented when Ryan began to fall, but Diabolico's spirit saved him. Mitchell said it was the hardest decision he ever had to make.

Ryan was raised by the demon Diabolico, who poisoned his mind telling him that his father had rejected him, favoring Dana. 20 years later, Diabolico instructed Ryan to steal the prototype Titanium Morpher from the Aqua Base and destroy the other Power Rangers (including his sister Dana) with the Titanium Power. He nearly succeeded, becoming the Titanium Lightspeed Ranger, but Ms. Fairweather brought the newly-developed V-Lancers, which overpowered Ryan. Just as the Power Rangers were about to destroy Ryan, Captain Mitchell told them to hold their fire and called them back and told them about the terrifying story after he told the rangers that the Titanium Ranger is his son. After some recall of his memories, Ryan rejected Diabolico and joined the Lightspeed Rangers. In response, Diabolico placed a cobra tattoo on his back, which would move up if he morphed and would kill him when it reached Ryan's neck. Eventually, Ryan manages to find the original cobra and destroy the curse, allowing him to transform freely. 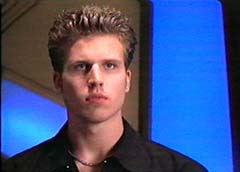 Retrieved from "https://hero.fandom.com/wiki/Ryan_Mitchell?oldid=1383084"
Community content is available under CC-BY-SA unless otherwise noted.