Birth of the 10th! Kamen Riders All Together!!

Protect the world from Badan and other evil organizations.

Vengeful Cyborg
Ryo Murasame (村雨 良 Murasame Ryō) is Kamen Rider ZX and the main protagonist of the TV special Birth of the 10th! Kamen Riders All Together!!

He was voiced by Akira Kamiya in the radio drama and portrayed by Shun Sugata in the TV special.

Birth of the 10th! Kamen Riders All Together!!

Ryo and his sister were shot down while flying in the Amazon jungle by a terrorist organization known as the Badan Empire and had both of them captured. Later, Badan kills his sister and turns Murasame into a cyborg warrior named ZX and brainwashes him; however, an accident enables him to regain his memory. Murasame becomes a Kamen Rider to avenge his sister. His first encounter with the past Kamen Riders is when he mistakes both Kamen Rider Super-1 and Riderman as soldiers of Badan. V3 arrived and stopped ZX, telling him that they're all enemies of Badan and want to destroy the Space Break System. Along with Riderman and Super-1, they explain to ZX, the history and meaning of being a Kamen Rider, and, finally, he decides to join them, as the 10th Rider, Kamen Rider ZX. Later he fight and successfully defeat Eisuke Mikage (Tiger-Roid). Afterwards, Badan's base was located, and all 10 Riders went towards it. Ambassador Darkness welcomed them and sent all of Badan's troops against the Riders. V3 faced Dokuga-Roid and his Combat-Roids again, and after a long battle managed to destroy him by throwing him onto a fallen Yamaarashi-Roid. Afterwards, V3 and Rider 2 teamed up against Jūjin Ōmukade, a revived Geddon monster. however, before the battle could be finished, Ambassador Darkness attempted to use hostages to make the Riders surrender. His plan fail due to Super-1's interference and Ambassador Darkness decides to use the Space Break System, only to destroy Badan's remaining troops. After V3's call, the ten Riders gather their power with Rider Syncro, weakening Ambassador Darkness and allowing ZX to finish him off with his ZX Kick. After Darkness is defeated, evil energy gathers in the shape of a giant skull, The Generalissimo of Badan, giving farewell to the Riders and laughing at them.

V3 bestows upon ZX the official name Kamen Rider 10 and soon all Riders part ways again to continue their battle against evil around the world.

Seeking to avert Badan's plan to swap the worlds of the dead and the living, Ryo Murasame assumed the guise of Ambassador Darkness and infiltrated Badan to get close enough to Badan's machine to raise the dead to destroy it. Once the Generalissimo of Badan unveiled the machine and prepared to use it open a portal to the living world, Ryo dropped his disguise and became Kamen Rider ZX to destroy the machine. However, the Generalissimo then revealed that he was aware all along of the Ambassador's true identity and that the machine he destroyed was just a decoy, while the real machine was already in the process of being activated.

However, ZX then joined with the rest of the Showa and Heisei Riders to fight their way through Badan's legions of revived monsters. After reaching the machine, the Riders all joined together to perform a combined Rider kick to destroy the machine. 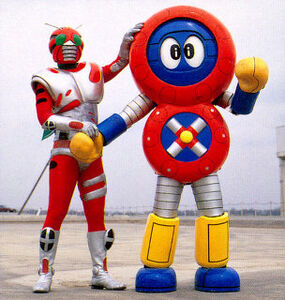 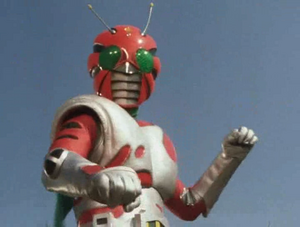