He is a Superintendent appointed to the Futo Police Department's Paranormal Crime Investigation Division (超常犯罪捜査課 Chōjō Hanzai Sōsaka), and is Mikio Jinno and Shun Makura's superior. Prior to arriving in Futo, Ryu lost his family; his father, his mother and his younger sister when a Dopant froze them solid. They shattered at Ryu's touch, killing them. In his final moments, Ryu's father warned him to beware the "Man with the W Memory". Ryu, however, goes the opposite direction and is driven for revenge with the aid of the mysterious Shroud. Because it is the source of Memories, he developed a hatred of Futo and saw it as a gathering place of all kinds of scum.

Ryu Terui first made a cameo appearance at the end of Kamen Rider × Kamen Rider W & Decade: Movie War 2010 proclaiming that Kamen Rider Double is not the only Kamen Rider in Futo City any more.

Ryu received his heavy Engine Blade from Shroud early on. He spies on the Narumi Detective Agency using his Beetle Phone while he waits for his Driver to be completed. Soon after, a new crime wave starts, eerily similar to his parents' death. Thinking he has finally found his families' murderer, he steps out of hiding, revealing that he has been spying on the Agency. He then gets his Driver and transforms into Kamen Rider Accel for the first time. However, Ryu goes overboard with the case, almost killing an innocent person he believed to be the Dopant. It turns out at the end of the case that the Dopant was Ice Age, and the W Dopant was still at large, putting things in perspective for Ryu.

Though he and Shotaro Hidari clash at first, Ryu becomes an ally to the Narumi Detective Agency when it comes to investigating the Dopant crime wave, as well as picking up some of Shotaro's habits in dealing with Dopants even after losing it upon finally finding his family's killer: the Weather Dopant, Dr. Shinkuro Isaka. After obtaining the Trial Memory from Shroud and learning to use it, Ryu is able to finally take his revenge on the Weather Dopant, using the Trial Maximum Drive to destroy his Gaia Memory, after which Isaka dissolved as a result of his long term abuse of Gaia Memories.

After Isaka's death, Ryu becomes more open to the others and continues his role as a Kamen Rider to fight off the Dopant crime wave prior to learning that it was Shroud who gave Isaka the Weather Memory, though she had no idea that his family would suffer as a result. Furthermore, Ryu learns he has a unique physiology, enabling him to withstand the intense power of certain Gaia Memories and was selected by Shroud because he can resist the Terror Dopant's Terror Field. Because of this, Shroud wants him to assume Shotaro's place as Double using his hatred to enable Double to reach full power. However, Ryu has shown Shroud that he can fight with compassion and does not need to be Double to fight. Furthermore, after Philip's disappearance after Jun Kazu's defeat, Ryu had grown to love Futo with a desire to protect it, overall a complete turnabout from his initial personality.

Although he eventually rejected her advances to stay professional, he eventually started a romantic relationship with landlady/head of the Narumi Detective agency Akiko Narumi. Giving her the affectionate nickname "Chief" (署長 Shōchō) to reference her status at the Agency and to give her authority, which she found cute. During the events of W Forever, Akiko tells him the story of how people watch the Fuuto Fireworks and fall in love, and she wants someone to watch it. So, just before he and Shotaro go to fight NEVER, he promises he will watch them with her. He fulfills his promise, and they fall in love. In Movie War Core, Akiko tries to stop him from being a Kamen Rider, saying it was getting in the way of their life (and their wedding day), and causing them too much pain. However, he says he is a Rider to protect her. That, combined with what she saw through the Memory Memory about her father, convinces her to allow him to keep his Driver and Memories.

In his Rider form, Ryu tends to say "Now, let's break away!" (さあ、振り切るぜ! Saa, furikiru ze!) whenever he assumes his Rider forms and states "Despair awaits you (all) at the finish!" (絶望がお前（たち）のゴールだ! Zetsubō ga omae (-tachi) no gōru da!, as Accel) and "[0.1-9.9] seconds, that is the time left until your despair!" (○○秒、それがお前の絶望までのタイムだ！ [0.1-9.9]-byō, sore ga omae no zetsubō made no taimu'da!, as Accel Trial) upon executing a Maximum Drive attack. The words on the back of his jacket read "spiritual state of nothingness makes even fire itself cool" which is a phrase derived from Buddhist philosophy. 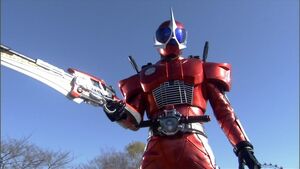 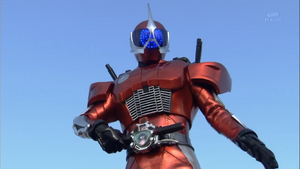 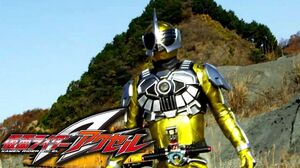