Assisting Sento in his experiments.

Prove his innocence in the murder of Takumi Katsuragi.

Protect the Pandora Box.
Stop Evolt from destroying the world.

Determinator
Heroic Jerk
Freedom Fighter
Ryuga Banjou transforms into Kamen Rider Cross-Z and is the deuteragonist of Kamen Rider Build. He was a former professional fighter who was disqualified after he accepted money to throw a match in order to pay for treatment for his ill girlfriend Kasumi. He was later framed for the murder of Takumi Katsuragi, a scientist studying the Pandora Box and was experimented on by Faust, but managed to escape and take refuge with Sento Kiryu, joining him in his fight to bring down the evil organization.

He was portrayed by Eiji Akaso.

Before Ryuga was born, his mother was exposed to the essence of Evolt while she was still a month pregnant, causing Ryuga to be born early.

As an adult, Ryuga became a professional fighter, but was banned from the sport after he threw a match so he could pay for his girlfriend Kasumi's medical bills. Forced to get a new job, Kasumi suggested Ryuga go to Takumi Katsuragi, a scientist who was supposedly looking for a lab assistant.

Sentenced to ten years in prison for the murder, while in prison, Ryuga was attacked by Masahiro Nabeshima, a prison guard working for Faust, who injected him with Nebula Gas, but due to his unnaturally high Hazard Level, he managed to retain his humanity and escape.

While being chased by Touto's Guardians, Ryuga ran into Sento Kiryu, who was curious about how his energy readings resembled that of a Smash. The two were then attacked by Strong Smash, but Sento fended it off as Kamen Rider Build. When the Touto Guardians arrived to recapture Ryuga, Sento helped him escape, believing that he was innocent.

While staying at the nascita cafe, Ryuga received a call from Kasumi. When he picked up the phone he discovered that the one calling him was Night Rogue, an executive of Faust, who told him they had abducted Kasumi and forced him to listen as they injected her with Nebula Gas before arranging a place to meet. After Sento and Ryuga arrived at the meeting place, Night Rogue introduced himself and sent the Burn Smash, which had been created from injecting Kasumi with Nebula Gas, after him. Sento attempted to save Kasumi but discovered that due to her frail body she would not survive the Smash transformation. Thus, after saying his final goodbyes to Kasumi, Ryuga asked Sento to end her suffering. After destroying the Burn Smash, Sento collected its essence into the Dragon Fullbottle and gave it to Ryuga as a token to remember Kasumi by.

When Touto is invaded by Hokuto with support from Stalk and Faust, Ryuga and Sento find themselves forced to ally with their old enemy Gentoku Himuro, who had previously menaced them as Night Rogue of Faust, become acting Prime Minister of Touto when his father fell ill. Though Gentoku was responsible for Kasumi's death Ryuga agreed to help after Gentoku promised to clear Ryuga's name. Becoming "weapons of war" for the Touto government, Ryuga and Sento fought Hokuto's Kamen Rider Grease and the Hard Smash trio, Hokuto Three Crows. It was during this time that Ryuga began using the Sclash Driver Sento had developed to transform into Kamen Rider Cross-Z Charge, despite Sento's warnings not to.

After Sento defeated Grease in a representative match to decide who would gain possession of Pandora's Box, Hokuto found itself invaded and conquered by Seito due to having no troops behind to safeguard their territory. Though the war with Hokuto seemed to be over, Seito soon declared war on Touto, and Ryuga was forced to go to war once again. The two also teamed up with Kazumi Sawatari / Grease to drive Seito out, as they were occupying his homeland as well. Ryuga and Sento would soon encounter an old enemy in this war, Gentoku Himuro, who had gone to Seito after being banished once his ties to Faust came out and become Seito's Kamen Rider, Kamen Rider Rogue.

Touto was later challenged to a representative match to decide the fate of Pandora's Box and Japan, and so Build, Cross-Z and Grease fought Seito's Rogue, Remocon Bro's and Engine Bro's in a 3-on-3 Representative Battle. After Grease won his match against Engine Bro's, Cross-Z fought Fu Washio / Remocon Bro's and was initially winning until Remocon stated that Namba was holding his brother Rai hostage and would kill him if he lost the match. Ryuga then allowed Fu to win but discovered soon after that Fu had lied and Rai was perfectly fine. Luckily, Sento was able to win the match for Touto by defeating Rogue in the third round.

Despite Seito losing the representative match, Seito continued to wage war against Touto after being taken over by Namba Heavy Industries. Ryuga and Sento also discovered during this time that their enemy Blood Stalk was really, Evolto, the extraterrestrial being who annihilated Mars, and that Evolto had fused some of his DNA with Ryuga. After re-obtaining his Evol Driver, Evolto possessed Ryuga to claim the rest of his DNA. He later left Ryuga to possess Sento, taking all of his DNA with him and rendering Ryuga unable to transform into a Kamen Rider. However, Ryuga manage to reobtain the ability to transform by regenerating Evolto's cells inside of him. Transforming into Cross-Z Great Dragon, Cross-Z, Grease and the recently defected Rogue all delivered a combined rider kick to Evolto, which Evolto absorbed the energy of to transform into his Final Phase: Kamen Rider Evol Black Hole, releasing Sento in the process as he no longer needed a host.

After the "Build Annihilation Plan" incident, Sento discovered data for a White Pandora Panel in his father's research. The White Pandora Panel could be used to destroy Evolto by using him to power the merging of the World of Build into an alternate world, creating a "New World" and in the process reviving everyone who had died. Ryuga and the other Kamen Riders were later challenged to a final battle at the Pandora Tower by Evolto after he revealed himself as an alien impersonating Masakuni Mido on national television. The four Riders met Evolto at the base of the tower where he explained the rules of their confrontation: they would have to reach the top of the Pandora Tower and for every 10 minutes they didn't he would destroy a section of Japan.

While Ryuga, Sento and Gentoku managed to reach the top of the tower and were soon joined by Misora and Sawa, Kazumi died after using the Blizzard Knuckle Sento had developed to transform into Kamen Rider Grease Blizzard and defeats Lost Smash clones of the Hokuto Three Crows to obtain their Lost Bottles for the White Pandora Panel. At the top of the Tower, Evolt snatched the Lost Bottles in possession of Team Build and used them to assume his Feverflow form. Ryuga, Sento and Gentoku transformed into their Kamen Rider forms but were devastated by the tremendous power of Evolto. However, after hearing the cheers of the people of Japan, Gentoku refused to give up and kept on fighting, damaging the Evol Trigger but also being killed by Evolto. Gentoku's damage to the Evol Trigger though caused Evolto to be stunned for a bit, enabling Cross-Z and Build to force the Black Pandora Panel out of him and combine it with the White Pandora Panel to begin the process of merging the World of Build with the main Kamen Rider world. However, the process needed someone to drag Evolto in between the two worlds so his energy could be used to power the fusion. Deciding that since he had Evolto's DNA inside of him he should go down too, Cross-Z sacrificed himself to drag Evolt in the crack between the two worlds.

Sento chased Ryuga into the rift between the two worlds and found Ryuga lying on the ground, though it turns out to really be Evolt in disguise. Evolt then reveals that he has absorbed Ryuga and that since he has survived, the merger will cause the two worlds to collide and destroy each other unless he can be defeated. Evolt then beats down Sento and prepares to finish him off, but before he can he is stopped by Ryuga resists him from the inside. Ryuga gives Sento some words of encouragement, telling him that his friends all believe in him and spits out the Dragon Fullbottle before Evolt fully consumes him. With the Dragon Fullbottle, Sento becomes Build RabbitDragon and destroys Evolto, allowing his energy to be used to complete the fusion of the two worlds, thus creating a world where Evolt never existed and where the Skywall Disaster never happened.

In the new world, Ryuga finds an alternate version of himself with Kasumi. He later finds Sento and the two go off to find a place for themselves in the new world.

When Evolto's older brother Killbas traveled to Earth to obtain the Pandora Box and use it to destroy the entire universe, Ryuga found himself forced to ally with Evolto, who had respawned from DNA he had placed inside Ryuga. The two later fused together and used the Muscle Galaxy Fullbottle Sento had developed to transform into Kamen Rider Cross-Z Evol and destroy Killbas. With Killbas defeated, Evolto states that he has grown bored of Earth and leaves in his Feverflow form. 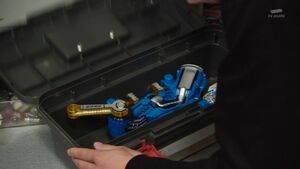 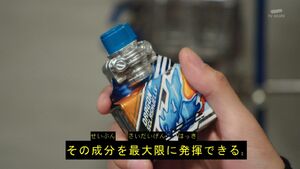 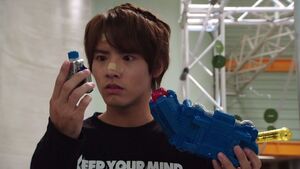 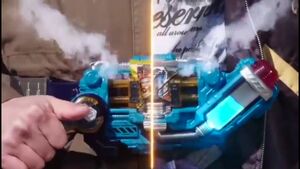 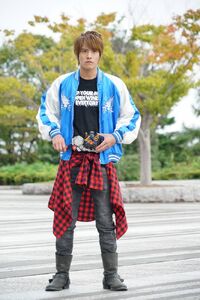 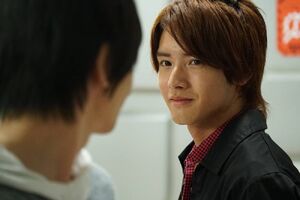 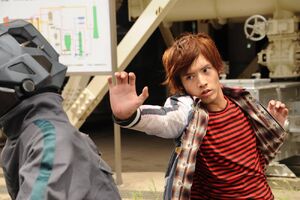 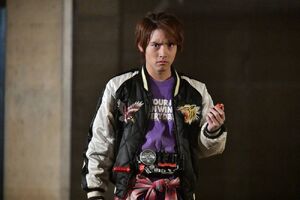 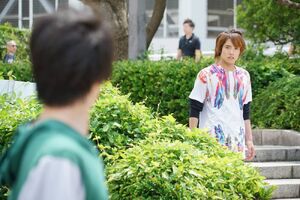